Epstein's "madam" mystery woman to reveal all to FBI? - The Horn News 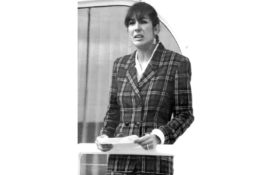 Jeffrey Epstein’s decades-long ring of pedophilia could get some well-needed answers soon.

Epstein is dead, but the pressure is mounting on his closest acquaintances who helped him run the sleazy underage sex empire.

And what she knows could put very powerful men like former President Bill Clinton in danger.

Ghislaine Maxwell, Epstein’s supposed “madam,” is being linked to reports that she will meet with the FBI very soon to tell her side of the story.

According to The Sun sources, she’s set to defend both herself and British Royal Prince Andrew from a bombshell photo, where the two are alleged to have been depicted with Virginia Roberts, one of Epstein’s victims.

The photo in question, said to have been taken in 2001, is below:

The Sun is reporting that a U.S. source close to Maxwell’s lawyer says she has “no option,” but to make a public appearance.

“Ghislaine is preparing to speak — whether by talking to the FBI or giving a statement to the media. She has to defend herself. She has no option. She will have to address this guilt by association.”

Maxwell, who reportedly acted as Epstein’s sex slave recruiter, is perhaps the most mysterious character in the whole saga.

According to Tatler, a British-based society magazine, Maxwell has denied allegations of her involvement in the sex trafficking scandal.

Her last public sighting was allegedly at an In-N-Out Burger in California over the summer:

Ghislaine Maxwell was spotted at In-N-Out Burger in the first sighting since Epstein's death.

She was reading a book called “The Book of Honor: The Secret Lives and Deaths of CIA Operatives."https://t.co/WLW3RHMHjF

But there’s much speculation that the photograph had been photoshopped.

And now it seems that Maxwell will allege that the infamous photo implicating she and Prince Andrew in the scandal was photoshopped, too.