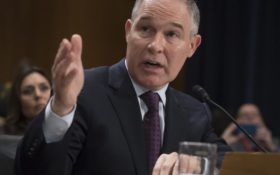 Scott Pruitt is turning the Environmental Protection Agency over to a far less flashy deputy who is expected to continue Pruitt’s regulation-cutting, business-friendly ways as steward of the country’s environment.

With Pruitt’s departure, President Donald Trump lost an administrator many conservatives regarded as one of the more effective members of his Cabinet. But Pruitt had also been dogged for months by scandals that spawned more than a dozen federal and congressional investigations.

“I have no doubt that Andy will continue on with our great and lasting EPA agenda,” Trump tweeted Thursday in announcing Pruitt’s resignation.

Republicans say Wheeler is well-qualified to lead the EPA, having worked at the agency early in his career. He also was a top aide at the Senate Environment Committee before becoming a lobbyist nine years ago.

Talking to reporters on Air Force One, Trump continued to praise his former EPA chief, saying there was “no final straw” and he had not asked for Pruitt’s resignation.

“Scott is a terrific guy,” Trump said. “He came to me and said I have such great confidence in the administration I don’t want to be a distraction. … He’ll go and do great things and have a wonderful life, I hope.”

In his resignation letter to Trump, Pruitt expressed no regrets.

“It is extremely difficult for me to cease serving you in this role first because I count it a blessing to be serving you in any capacity, but also, because of the transformative work that is occurring,” Pruitt wrote. “However, the unrelenting attacks on me personally, my family, are unprecedented and have taken a sizable toll on all of us.”

Pruitt, a Republican, had appeared Wednesday at a White House picnic for Independence Day, wearing a red-checked shirt and loafers with gold trim. Trump gave him and other officials a brief shout-out, offering no sign of any immediate change in his job.

A former Oklahoma attorney general close to the oil and gas industry, Pruitt had filed more than a dozen lawsuits against the agency he was picked to lead. Arriving in Washington, he worked relentlessly to dismantle Obama-era regulations that were bad for businesses.

People in Pruitt’s home state differed on whether the scandals in Washington left him with any prospects of a political second life in Oklahoma.

Ethical charges aside, many Republicans in oil-and-gas dependent Oklahoma are focused more on what they consider his regulation-trimming accomplishments at the EPA, said Oklahoma Republican Party Chairman Pam Pollard.

“We’re proud of him for that,” Pollard said. “I think Oklahomans still love him, support him and trust him. We’ll give him the opportunity to tell his side of the story.”