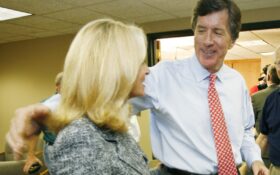 Longtime Minnesota congressman Jim Ramstad, a moderate Republican whose battle with alcoholism led him to become a champion of mental health and recovery issues, has died. He was 73.

His former chief of staff, Dean Peterson, said Ramstad died at his home in Wayzata late Thursday of Parkinson’s disease.

“He leaves a legacy of love, service, dignity and respect, especially for the most vulnerable in our society,” Peterson said in a letter to supporters, first reported by Minnesota Public Radio.

Ramstad served nine terms in the U.S. House before retiring in 2009. He represented Minnesota’s 3rd District, which includes several Minneapolis suburbs. He also served for 10 years in the Minnesota Senate.

“Jim’s political philosophy was guided by a fundamental belief in the importance of working in a bipartisan, pragmatic, common sense way to solve problems,” Peterson said.

Ramstad’s accomplishments included expanding access to mental health treatment. He was chief sponsor of legislation that opened the door to treatment for millions of Americans suffering from mental illness or chemical addiction, an act named for the late Sen. Paul Wellstone, a Minnesota Democrat who was also passionate about mental health equity.

Shortly before his death, Jim celebrated his 39th year of sobriety. He spoke openly on how he hit his low point. He awoke in a South Dakota jail cell in a blackout after his arrest for a drunken disturbance at a Sioux Falls hotel coffee shop while he was a state senator. That shock started him on the road to recovery.

“If I had not wound up in that jail cell, I would not have sought treatment. I probably would be dead today,” Ramstad told The New York Times in 2006, for a story on how he became an Alcoholics Anonymous sponsor for Democratic former U.S. Rep. Patrick Kennedy of Rhode Island.

“A lot of folks who run for office today get involved in politics because they’re more about an ideology rather than offering solutions to problems facing their community, the state and the country,” Republican former U.S. Rep. Erik Paulsen, who succeeded Ramstad, told the Star Tribune. “Jim was about identifying a problem and fixing it.”

Democratic Gov. Tim Walz, a former congressman, tweeted that Ramstad was “a colleague, mentor and friend. … Few members of Congress commanded the respect and admiration of their peers and constituents that Jim Ramstad did. ”

Ramstad, who was born in Jamestown, North Dakota, is survived by his wife, Kathryn, and a daughter, Christen DeLaney. A service for his immediate family will be held at 4 p.m. on Sunday, Nov. 29, and will be available for public viewing via the Wayzata Community Church website.