Embassy move to Jerusalem is symbolic (Here's why... ) - The Horn News 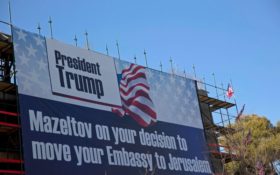 When the Stars and Stripes is hoisted over the new U.S. Embassy in Jerusalem next month it will be a physical milestone in a broader, striking shift by the Trump administration away from a half-century of traditional U.S. policy toward Israel and the Palestinians.

For decades, even amid close U.S.-Israeli ties, Washington has tried to position itself as a neutral party in the vexing Mideast conflict, willing to call out both sides when they take steps seen as contrary to the pursuit of peace. Yet the expected May 14 move of the embassy from Tel Aviv to Jerusalem will be just the latest in a series of steps the administration has taken that have delighted Israelis and angered and alienated the Palestinians.

Over the course of his first 16 months in office, President Donald Trump has recognized Jerusalem as Israel’s capital over Palestinian objections, slashed American aid to the Palestinians and programs that support them and ordered their office in Washington closed, though he ultimately let the office stay open. Just last week, Trump’s administration signaled it may be moving away from describing the West Bank as “occupied” by Israel.

Most recently, the Trump administration has steadfastly avoided any public comments critical of Israel related to its handling of mass protests along the Israel-Gaza border. At least 34 have died since March 30, including a journalist killed by Israeli forces.

Typically, in other parts of the world, Trump’s administration has been vocal and quick to condemn violence against journalists, including in NATO-ally Turkey and in Russia. Last year, when a car bomb killed a reporter in Malta, State Department spokeswoman Heather Nauert condemned the “appalling violence” and called for a “thorough, transparent and independent” investigation.

Yet after a well-known Gaza journalist was killed this month, the U.S. took a much more cautious approach, and seemed inclined to accept the Israeli defense minister’s accusation that the journalist was actually a member of Hamas. That’s despite the fact that journalist, whose family denies he was a Hamas member, had been screened by the U.S. government before his company was granted a USAID grant.

“We don’t always issue statements on world events, no matter how difficult they may seem to people,” Nauert said. Rather than call for an independent probe, she said Israel was doing its own investigation into potential excessive use of force, and left it at that.

Taken together, the moves indicate that Trump intends to make good on his unabashedly pro-Israel campaign promises at the expense of long-standing U.S. humanitarian and political commitments to the Palestinians. Whereas previous presidents and their administrations have gone out of their way to appear evenhanded, Trump has made no secret of his affinity for Israeli positions.

The White House pushes back on criticism that the administration has been unfair to the Palestinians. A senior official pointed to Trump himself having made an Israeli-Palestinian peace deal a priority and assigned some of his most trusted advisers to the task. The official also noted that the White House last month convened an international conference to discuss humanitarian assistance in Gaza.

For the Palestinians, who all but cut ties with the White House after the embassy move was announced and did not attend the Gaza conference, the totality of the steps has reinforced the concern that they are unlikely to get a fair bargain from Trump if and when his long-awaited Mideast peace plan is announced.

Trump’s son-in-law and senior aide, Jared Kushner, is in charge of that ambitious project. But the administration has essentially had to put the plan on hold after the Jerusalem decision when it became clear the Palestinians were so outraged that any plan unveiled at this time would have scant chances for success, several individuals briefed on the administration’s thinking said. They and others not named in this report were not authorized to discuss such matters publicly and requested anonymity.

For the Israelis, who were delighted when the staunchly pro-Israel Trump was elected, the steps come amid simmering tensions between Trump and Israeli Prime Minister Benjamin Netanyahu’s government over Syria, where Israel is concerned that Trump’s plan to withdraw U.S. troops as soon as possible will give Iran a free hand to operate. Despite the close U.S.-Israel alignment on the Palestinian issue, concerns about Trump’s approach to Iran has increasingly become a sore point, U.S. officials have said.

Some of the shifts away from previous U.S. policy have been subtle. In its annual human rights reports released Friday, the State Department removed the term “occupied territories” from the title of sections covering Israel, the West Bank and Gaza, which had been the standard for more than 20 years. The 2017 report did not entirely eliminate the term from the report, but it significantly reduced its use. Compared with more than 40 references in the 2016 report, the words “occupation” or “occupied” appeared only six times.

Removal of the phrase has been championed by U.S. Ambassador to Israel David Friedman, who also lobbied heavily for the recognition of Jerusalem and the embassy move but has so far been prevented from adopting the Israeli name “Judea and Samaria” for the West Bank in his official remarks and statements, according to administration officials. Friedman and Trump’s envoy for international negotiations Jason Greenblatt have also led internal administration opposition to criticism of Israel for its response to the recent Gaza protests organized by Hamas, a designated terrorist organization, the officials said.

In January, the administration announced that it was suspending almost half of a planned $125 million package of assistance to the U.N. Relief and Works Agency, which provides services to Palestinians. After intervention from then-Secretary of State Rex Tillerson, the administration did provide $60 million but made clear further contributions would depend on a review of UNRWA practices. That review is still pending.

Of $251 million in U.S. aid that had been budgeted to go to the Palestinians in the current budget year that ends in September, none of it has been obligated for specific programs and only $92 — ninety-two dollars — has been spent, according to the State Department’s Foreign Assistance website (www.foreignassistance.gov). In fact, not only has none of the $251 million been obligated, $95,283 has been taken away from the West Bank and Gaza account, according to the website.

The cuts in aid follow the administration’s decision last fall to order the closure of the Palestinian representative office in Washington after arguing that the Palestinian leader had violated a U.S. law by calling for Israeli officials to be prosecuted. Ultimately, the U.S. backtracked, letting the office stay open but forcing it to curtail its official activities.