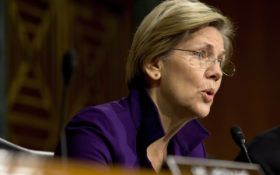 Massachusetts Sen. Elizabeth Warren made headlines over the weekend when she released DNA evidence showing she was between 0.1 percent to 1.6 percent Native American.

But if Warren thought boasting of a non-white ancestor from between six and 10 generations ago would help her poll numbers, she was wrong. Very wrong.

In just one day, the political stunt backfired spectacularly.

For years, Warren has been criticized over past claims that she was the first ever woman minority Harvard Law factual member.

Opponents said she used bogus family stories to advance her career. Warren’s DNA results were intended to silence those critics.

Instead, they’ve angered a whole new set of critics: The tribe of actual American Indians that Warren claims to be descended from.

The Cherokee Nation put out a statement Monday calling Warren’s action an insult to all Native Americans and harmful to tribal interests.

“Using a DNA test to lay claim to any connection to the Cherokee Nation or any tribal nation, even vaguely, is inappropriate and wrong,” read a statement by Cherokee Nation Secretary of State Chuck Hoskin Jr.

“It makes a mockery out of DNA tests and its legitimate uses while also dishonoring legitimate tribal governments and their citizens, whose ancestors are well documented and whose heritage is proven,” the letter read.

Simon Moya-Smith, a citizen of the Oglala Lakota Nation and self-professed liberal, wrote a scathing op-ed to CNN on Monday that slammed the “sneaky” political stunt.

“It’s not enough to claim to be Native,” Moya-Smith wrote. “You must also be there for your people, be a part of the community, and not only when it’s convenient or when you want something — like the presidency.

President Donald Trump — a frequent critics of Warren — also had something to say about Warren’s DNA theatrics as well.

Pocahontas (the bad version), sometimes referred to as Elizabeth Warren, is getting slammed. She took a bogus DNA test and it showed that she may be 1/1024, far less than the average American. Now Cherokee Nation denies her, “DNA test is useless.” Even they don’t want her. Phony!