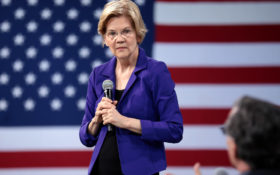 Sen. Elizabeth Warren, D-Mass., and her campaign for the 2020 Democratic presidential nomination are in trouble.

With seven days to go until the Iowa caucus, her campaign knows it. The Warren team sent out a warning letter to her supporters, urging them not to believe the media’s narrative following the Feb. 3 caucus.

It means that Warren’s internal polling numbers show she’s fading fast in Iowa. And without momentum in the early states, her hopes for the 2020 presidential nomination is drying up.

“We expect this to be a long nomination fight and have built our campaign to sustain well past Super Tuesday and stay resilient no matter what breathless media narratives come when voting begins,” wrote Roger Lau, Warren’s campaign manager.

According to Politico, the Warren campaign rarely, if ever, discusses political strategy with supporters and donors.

Doing so just days ahead of the first votes indicates trouble ahead.

The Warren team has a right to be fearful.

After all, Iowa for Democrats is critically important. The winner in the Hawkeye State has gone on to become the presidential nominee for the past decade and a half. As of now, a RealClearPolitics poll has Warren in fourth place among all candidates.

In a way, the biggest winner of a reduced field may be President Donald Trump.

The quicker Democrats select a candidate, the quicker the Trump re-election campaign can begin targeting his would-be opponent.

Trump, with an incredible fundraising track record during his tenure, has a stockpile of resources at his disposal. He’s ready for whoever the Democratic nominee will be.

There’s no current Democrat — apart from long-shot billionaire Michael Bloomberg — who can spend anywhere near the amount that the president has in his war chest.

One thing is increasingly clear: It won’t be Warren.