Elizabeth Warren doesn’t want THIS getting out (Embarrassing!) - The Horn News 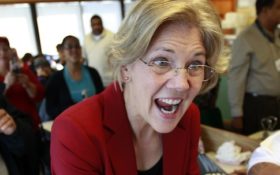 Senator Elizabeth Warren is running for president as a “progressive” Democrat. The former Ivy League professor promises to “fight” for the little guy by passing socialist programs.

That’s a radical economic agenda, but has Warren a deep secret: Her public positions may be phonier than her Cherokee heritage!

Elizabeth Warren didn’t register as a Democrat until 1996—when she was 47 years old!

She only changed party registration, and her views on major national issues, when it advanced her career.

As far back as high school, one of Warren’s friends remembered the Democratic presidential hopeful to have been an “ice-cold Republican.”

“Liz was a diehard conservative in those days,” Harry told Politico.

The weird thing is that evidently Warren’s parents weren’t Republicans, and most of Oklahoma at that time was still rock-solid Democrat.

So, being a Republican is something Elizabeth Warren chose because she really believed in it.

A lot of people change parties, especially after high school. But Warren stayed a Republican well after she was an adult.

After Warren got hired as a full-time professor at the University of Houston, one of her first papers dealt with her favorite topic: big business and poor consumers.

Utility companies like electric, natural gas, and telephone companies at the time had jacked up prices year after year, and it hit the poor and elderly hard.

What did the pro-consumer warrior want to do about it?

The “progressive” fighter wanted to roll back government regulations!

That’s a conservative—even a libertarian—position, and writing it helped Warren get ahead.

She moved on to a better position at the University of Texas at Austin—the capital of the country’s biggest, reddest state with the biggest stock of oil and natural gas.

“If you had to pick a professor at Harvard to become a progressive icon in a decade, she wouldn’t have even been on the short list,” said Angela Littwin, who studied under Warren at UT at the time.

So, what changed her mind?

Warren says she changed her mind when she investigated bankruptcy cases in 1982 and found out evil corporations were screwing the little guy…but her story doesn’t wash.

That happened in 1982—but her colleagues remember that Warren was still a centrist Republican when she moved to the University of Pennsylvania in the late ’80s!

The first time he heard Warren speak when she ran for Senate, “I almost fell off my chair,” said Gary Francione, who taught with Warren at the time. “She’s definitely changed.”

So, what really happened?

It’s all comes down to two things: money and power.

First of all, in the 1990s Warren had just gotten hired as Harvard University’s star “Native American” professor. Cambridge is no place for a Republican, any kind of Republican.

Second, Warren flopped to the Democratic Party in 1996—right after President Bill Clinton appointed her to a commission to study national bankruptcy laws…and Warren started to see a future for herself in politics.

She knew she wouldn’t get elected in Massachusetts, much less get the Clintons’ endorsement, as a Republican.

She changed parties, but at first she tried to make herself a Clinton-type “centrist.”

Even as late as 2003, she told politicians not to adopt a “quasi-socialist safety net to rival the European model,” in her book, The Two Income Trap.

That would get her run out of the Democratic Party on a rail today!

In the next few years, she became exactly the Born Again “progressive” that she needed to be in order to run for office from Taxachusetts.

What really set her teeth on edge was in 2005, when a Republican set all her Clinton-era work on fire.

President George W. Bush signed a bankruptcy law that ignored all her suggestions and “brilliant” insights.

Then-Senate Majority Leader Harry Reid got wind and called Warren back to D.C. in 2008 to take a huge role in overseeing one of the worst government debacles in the history—the Troubled Asset Relief Program, or TARP.

We know it better as the government bailout of irresponsible banks and big business with taxpayers’ hard-earned money.

Thanks a trillion, Liz!

As part of the package, she proposed a new government agency: the Consumer Financial Protection Bureau. The whole agency is so unconstitutional that federal courts forced it to change its structure.

Politico says that Warren’s flip-flops show “a willingness to change when presented with new data, and the anger of someone who trusted the system and felt betrayed.”

Actually, it shows a complete and total lack of principles.

If Warren will do anything to win, what will she do once she’s in office?