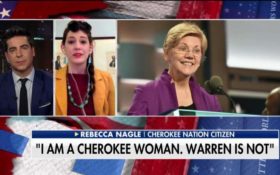 Senator Elizabeth Warren’s claim that she is from an American Indian heritage has come under fire again — and this time, it is a Native American calling her out.

For years, Warren has claimed that her parents were forced into an elopement due to her grandparent’s disapproval of her mother’s Native American heritage.

A young Cherokee woman, Rebecca Nagel, has come forward to blast Warren for using a lie about Native American ancestry to advance her political career.

Warren used claimed of a Cherokee heritage in her adulthood she to land a job with Harvard, and proudly flaunted her supposed ‘minority’ status.

But Nagel, who is a real Cherokee native, does not believe that Warren is telling the truth.

“As a mixed Native woman, I get to relive the stereotypes that Warren perpetuates every day,” Nagle told Watters.

Nagel appeared on Fox News and spoke with Watters about how despite the fact that many Cherokee people have come forward asking Warren to stop discussing her unproven heritage, she is still using it as a political bargaining chip.

“I’m not part-Cherokee, I am Cherokee,” Nagle said. “We’re not fractions of imagined Indians that used to exist. [Warren] should take responsibility for her false claim.”

Watters then questioned, “So wait you’re saying she’s not Cherokee from your understanding at all?”

“For people to draw on a distant relative, where they have a fuzzy connection, where they can’t name it — I can’t think of a grosser misrepresentation of who we are. We’re really connected, we know each other,” Nagel responded.

Watters then asked Nagel, “You’re a Democrat, if she does come out an apologize, would you vote for her?”

Instead of answering the question, Nagel hesitated and then tip toed around to a different subject.

You can watch the stunning video here —