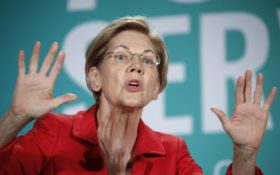 Former President Donald Trump started the Trump Media & Technology Group (TMTG) in February after getting the boot from Twitter.

Now, Trump is planning to merge the company with Digital World Acquisition Corporation (DWAC) and eventually create his own social media network.

But Sen. Elizabeth Warren (D-Mass.) isn’t happy about it. She urged the federal government to investigate the company for market manipulation.

Digital World allegedly failed to disclose all its meetings about the merger, The New York Times reported in October.

With this in mind, Warren wrote a letter to the Securities and Exchange Commission in November and claimed the company might have broken the law.

Warren also faulted the company for its “lack of a core business model” and sloganeered about “the need to hold public officials accountable.” She went on to take issue with not only DWAC, but also all similar corporations, called SPACs (special purpose acquisition companies).

[Digital World], the Special Purpose Acquisition Company (SPAC) that in October 2021 announced its plan to merge with former President Donald Trump’s Trump Media and Technology Group, may have committed securities violations by holding private and undisclosed discussions about the merger as early as May 2021, while omitting this information in U.S. Securities and Exchange Commission (SEC) filing and other public statements.

She finished by asking some questions, including:

Warren has become known for her ambivalent relationship with Big Tech.

As a presidential candidate, she unveiled an early plan for breaking up Facebook and Amazon. After that, she accused Facebook of acting as “a single censor” for deleting her campaign ads.

However, she has remained silent on the Consumer Financial Protection Bureau’s new rules, which would allow debt collectors to message consumers via Facebook and Instagram. Warren proposed creating that bureau in 2007, but she still has yet to publicly comment.

In the letter, Warren asked for a response by Monday, Nov. 29.

It remains unclear whether the agency has responded.

On Friday, the Washington Times contacted the SEC for comment but received no response.