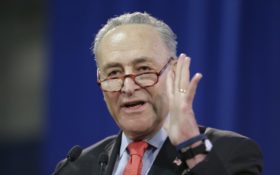 The presidential race went all the way down to the wire. The two campaigns—and their legal teams—still have massive disputes about who really won the largest number of legitimate ballots cast.

At the time of writing, no one is certain who will ultimately come out on top. But we can say for certain who lost the 2020 election.

By far the people who lost the most this election cycle are the deep-pocketed donors who thought their millions (or billions) could buy their way into power.

Liberal billionaire Tom Steyer spent $200 million on his presidential campaign before the first vote was even cast and didn’t win a single delegate.

Former New York City Mayor Michael Bloomberg did just a little bit better: He spent more than $1 billion on his longshot presidential campaign and won 55 delegates—all in American Samoa—at the cost of $18 million per delegate.

But Bloomberg decided he hadn’t wasted enough money—so he promised to spend $100 million of his $65 billion estimated fortune to help Joe Biden win Florida. Bloomberg even paid the fines so that 32,000 convicted felons could vote, because his advisors told him it’s “a more cost-effective way of adding votes to the Democratic column than investing money to persuade voters who already have the right to vote.”

Instead, Donald Trump—whose luxurious Mar-a-Lago resort is located in Palm Beach—won the state by an even wider margin than he did in 2016.

That was the story coast-to-coast, as donors blew millions on losing races against popular Republicans.

Donors decided to take down Senate Majority Leader Mitch McConnell by pouring $90 million behind Democratic challenger Amy McGrath, who won about the same number of votes as his underfunded challenger four years ago.

Liberals wanted to humiliate Sen. Lindsey Graham, R-S.C., for turning from a Trump critic into a supporter, so they spent $108.9 million funding Democrat Jaime Harrison, who badly lost on Tuesday.

Graham rubbed the Democratic donors’ noses in it during his victory speech.

“You wasted a lot of money,” he said. “This is the worst return on investment in the history of American politics.”

And donors wanted to punish Maine Republican senator for backing Justices Kavanaugh and Barrett, so they donated $69.5 million to Democrat Sara Gideon. But Susan Collins won, even though every poll showed her losing, which brings us to the second class of losers….

No profession lost more credibility on Tuesday night than pollsters, who failed to accurately gauge America’s wide, broad, and deep support for President Donald Trump for a second straight election.

They all predicted an easy Biden victory, probably in a landslide.

The Washington Post poll had Biden smashing Trump by seven percent in the popular vote and destroying him in the Electoral College by 350 to 188.

But two days later, the election is so close that both candidates are having a hard time finding the road to 270.

Polls also insisted a “Blue Wave” would give Democrats control of the Senate and expand their lead in the House of Representatives.

But Republican voters defied pollsters ad won contested races like Collins’ to keep the Senate—and lost seats in the House.

The New York Times “Democrats’ ‘Blue Wave’ Crashed in Statehouses Across the Country.”

Rachel Maddow told MSNBC, “On either side, you’re not seeing—not only no wave, it’s like a pond where you drop in a rock and there’s no ripples.”

Pollsters should go back to measuring public opinion instead of trying to shape it.

You had one job: win more seats for your party in the middle of the lousiest year in modern American history. But it was a job Senate Minority Leader Chuck Schumer and Nancy Pelosi couldn’t pull off.

“House Democrats hoping to grow their majority had failed to defeat a single Republican incumbent, while they lost a handful of seats in Trump-friendly districts,” Roll Call reported.

When a leader fails to deliver he, or she, usually gets a pink slip. That’s especially true if they’re already unpopular, have been in power for a long time, and have failed to get the job done for multiple election cycles, like Pelosi.

Look for her caucus to become even harder to manage in the years ahead.

Whoever actually won the 2020 election, we can sleep a little easier knowing that many of the right people lost.