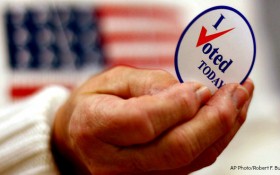 Today is Election Day across the country, and voters in at least a few states will be deciding on some major issues.

The Nov. 3 elections, though likely to draw fewer voters than next year’s presidential contest, could nonetheless provide a test of public opinion on such topics as gay rights, pot legalization, Common Core educational standards, and the emerging “sharing economy,” which includes services that allow individuals to rent out rooms in their homes via the Internet.

A pair of Michigan lawmakers who left office in a bizarre sex scandal will also make a bid for a political comeback in special primary elections for their old seats. And months of heavy spending will finally culminate with the selection of a new Kentucky governor and a decision on who controls the Virginia Senate.

Here’s what you need to know for the 2015 election:

The race to succeed term-limited Kentucky Gov. Steve Beshear, a Democrat, features candidates who have taken contrasting positions in the national debates over gay marriage and Medicaid expansion.

Democratic Attorney General Jack Conway opted not to appeal when a federal judge ordered Kentucky to recognize same-sex marriage, a year before the U.S. Supreme Court legalized it nationwide. His gubernatorial rival, Republican businessman Matt Bevin, describes himself as a Christian conservative and defends Kim Davis, the county clerk who was jailed for refusing to issue marriage licenses to same-sex couples. Bevin also promises to overturn Common Core teaching in the state.

In Tuesday’s only other gubernatorial race, Republican Mississippi Gov. Phil Bryant has spent $2.7 million on his re-election bid, easily outdoing the $3,000 spent by Democratic nominee Robert Gray, a truck driver.

Just three states have general legislative elections Tuesday, though at least 10 others will hold special elections to fill vacant seats.

The biggest battle is for control of the Virginia Senate, where Republicans currently have a 21-19 advantage. A gain of just one seat by Democrats could flip control, because Democratic Lt. Gov. Ralph Northam would serve as the tiebreaker. The high stakes have attracted large campaign contributions. The nonprofit Virginia Public Access Project says three particularly competitive state Senate races all are on track to break the prior record for the state’s most expensive legislative contest.

Republicans are better positioned to maintain majorities in the Virginia House and in Mississippi’s two chambers. Democrats are looking to hold onto their majority in the New Jersey Assembly.

In Michigan, former state Reps. Todd Courser and Cindy Gamrat will appear on Tuesday’s special primary ballot for their old seats, just months after they left office following revelations they had an extramarital affair and concocted a strange story to make the truth seem less believable.

More than 300 cities will hold mayoral elections, including the nation’s fourth and fifth largest cities of Houston and Philadelphia. In Houston’s nonpartisan election, seven candidates are seeking to succeed term-limited Mayor Annise Parker. In Philadelphia, where Democrats hold a 7-to-1 voter registration edge over Republicans, Democratic nominee Jim Kenney is the favorite to succeed term-limited Mayor Michael Nutter.

The battle over marijuana shifts to Ohio, where a ballot initiative would legalize the recreational use of pot by adults 21 and older and allow for medicinal use by others. The initiative would authorize 10 particular facilities to grow marijuana. A separate measure, referred to the ballot by legislators, seeks to nullify the marijuana proposal by adopting a ban on constitutional amendments that create an economic monopoly.

Colorado voters, who approved the recreational use of marijuana in 2012, must now decide what to do with about $66 million of marijuana tax revenues. If approved, a ballot measure would let the state spend the money on schools and other projects. If rejected, the money would be returned to taxpayers and marijuana growers, and the pot sales tax would be temporarily rolled back. A state law requires new tax revenues to be refunded when overall state income exceeds projections.

Houston voters will decide whether to grant non-discrimination protections for gay and transgender people. The referendum on a city ordinance originally passed last year has drawn support from the White House and Apple Inc. Opponents include a coalition of conservative pastors who contend it would infringe on their religious beliefs against homosexuality. With same-sex marriage now legal nationwide, nondiscrimination laws have become the new priority for many lesbian, gay, bisexual and transgender groups.

San Francisco voters will decide whether to limit the “sharing economy” services in which people rent rooms directly from others through Internet bookings. A ballot measure would cap short-term housing rentals at 75 days a year and require Internet hosting companies such as San Francisco-based Airbnb to pull listings that violate the limit. Airbnb has poured millions of dollars into the opposition campaign.

Texas roads could gain at least $2.5 billion annually, starting in 2017, if voters approve a proposed constitutional amendment. The measure would divert general and vehicle sales tax revenues toward a highway fund when collections exceed certain thresholds. It comes just one year after Texas voters approved an amendment diverting $1.7 billion of oil and gas tax revenues from the state Rainy Day Fund to highways.

In Maine, voters are considering an $85 million bond issue for roads, bridges and other modes of transportation. If approved, it’s projected to draw more than $120 million of additional federal funding.

In Mississippi, voters can choose between two rival education measures or opt for neither. A citizens’ initiative would require “an adequate and efficient” public school system and grant the courts power to enforce that. An alternative, referred to the ballot by legislators, would simply require the Legislature to provide an “effective” school system. The measures come as state funding for schools has fallen short of what is called for under state law, but neither measure would specifically raise taxes.