‘El Chapo’: I changed my mind, extradite me ASAP! - The Horn News 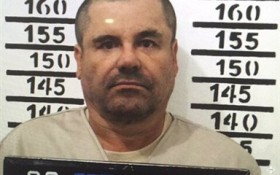 A lawyer for drug lord Joaquin “El Chapo” Guzman said Wednesday his client now wants to be extradited as soon as possible to the United States because guards at a Mexican maximum-security prison won’t let him sleep.

Lawyer Jose Refugio Rodriguez said Guzman told him to negotiate with U.S. authorities for a lighter sentence and confinement at a medium-security prison.

“He has reached the limit,” Rodriguez said. “It is an act of desperation.”

“He said to try to get a negotiation with the American government,” Rodriguez said, adding, “We know of agreements with other people for confinement in medium-security prisons … a much lower sentence.”

It was unclear what kind of agreements Rodriguez was referring to; though some Mexican drug suspects have reached some form of plea deals with U.S. authorities in the past, it is not clear any have ever been able to negotiate terms on where they will be held.

The U.S. Embassy in Mexico City said it does not comment on extraditions.

Guzman’s lawyers had previously vowed to fight extradition as long as possible, and Mexican officials had acknowledged it would take at least a year and perhaps more for the extradition process to work its way through Mexican courts.

But Rodriguez suggested it could be done in two months, presumably if Guzman dropped an estimated nine appeals his lawyers have filed.

However, Rodriguez said “we won’t drop the (legal) defense in Mexico until we have an agreement with the United States.”

Officials have acknowledged that guards at the Altilplano prison wake Guzman every four hours for a head count. He escaped the same prison in July and was recaptured in January.

The harsher regime — Guzman also has fewer visits than during his last stint in prison — seems to have broken him.

In February, Rodriguez gave The Associated Press a copy of Guzman’s testimony in one of the cases against him. In it, the jailed drug lord accused prison authorities of torturing him “by waking him up, and said, “I feel like a sleepwalker.”

“My head and my ears always hurt and I feel bad all over,” Guzman said in the document.

The testimony also sheds light on the relatively permissive visitors’ schedule Guzman enjoyed at the maximum-security prison before his escape in July. It has been reduced since he was recaptured in January.

Guzman said that previously he had been give an hour-and-a-half every day to talk to his lawyer and an hour in the sun in a prison patio. Every nine days, he was allowed a four-hour conjugal visit and a four-hour family visit.

National security commissioner Renato Sales, whose responsibilities include overseeing federal prisons, said at a news conference Monday that Guzman’s human rights are in no way being violated at the Altiplano prison,

Sales pointed out that Guzman has escaped twice from Mexican prisons.

“Shouldn’t someone who twice escaped from maximum security prisons be subject to special security measures? The common sense answer is yes,” Sales said.

Guzman faces charges in a number of federal courts across the country, and authorities have not said which U.S. prosecutors will have the first crack at the drug lord. Therefore, at this point there is no one to negotiate such a deal — not that anyone would likely be willing to do so before Guzman had even set foot in a U.S. courtroom.