Eighth planet found in faraway solar system (it matches ours!) - The Horn News 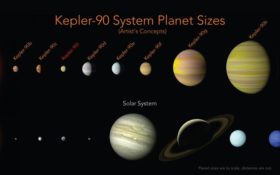 A record-tying eighth planet has been found in a faraway solar system, matching our own in number.

Even more amazing, machines and not humans made the discovery. NASA joined with Google on Thursday to announce the finding.

This eighth planet orbits the star known as Kepler-90. Like Earth, this new planet, Kepler-90i, is the third rock from its sun. But it’s much closer to its sun — orbiting in just 14 days — and therefore a scorching 800 degrees Fahrenheit (427 Celsius) at the surface. In fact, all eight planets are scrunched up around this star, orbiting closer than Earth does to our sun.

This is the only eight-planet solar system found like ours — so far — tying for the most planets observed around a single star.

Our solar system had nine planets until Pluto was demoted to a dwarf planet in 2006 by the International Astronomical Union, a decision that still stands. Some astronomers, however, suspect there could be a large ninth planet out there: an elusive Planet X the size of Neptune but much farther out.

The Kepler-90 system also could have a ninth planet or more, according to the researchers. It is 2,545 light-years away; a light-year is 5.8 trillion miles.

Google used data collected by NASA’s keen planet hunter, the Kepler Space Telescope, to develop the machine-learning computer program. It focuses on weak planetary signals — so feeble and numerous it would take humans ages to examine.

While machine learning has been used before in the search for exoplanets — planets beyond our solar system — it’s believed to be the first time an artificial neural network like this has been used to find a new world.

“This is a really exciting discovery, and we consider it to be a successful proof of concept to be using neural networks to identify planets, even in challenging situations where the signals are very weak,” said Christopher Shallue, a senior software engineer at Google in Mountain View, California.

NASA astrophysicist Jessie Dotson, the Kepler project scientist, is “so excited to see where this goes next.”

“Who knows what potential insights might be gained,” she said.

Shallue teamed up with astronomer Andrew Vanderburg of the University of Texas at Austin to develop the program. They essentially trained a computer to identify exoplanets based on Kepler’s observations in changing stellar brightness — the subtle, fleeting dip in a star’s brightness when a planet passes in front of it.

The two used a technique similar to what had been previously used by others to enable machines to distinguish between pictures of cats and dogs.

Besides identifying Kepler-90i, the machine-learning program also confirmed an exoplanet missed by astronomers in yet another solar system: Kepler-80g, the sixth planet in that particular solar system.

Shallue and Vanderburg plan to keep up the hunt, using the program to scour the 150,000-plus stars observed by Kepler.

In all, more than 3,560 exoplanets have been confirmed to date — two-thirds of them spotted by the 2009-launched Kepler — with another approximately 4,500 candidates awaiting verification.

It will be up to more advanced telescopes, like the James Webb Space Telescope targeted for launch in 2019, to study the atmospheres of these distant worlds and sniff out any traces of possible life, Vanderburg noted.

Shallue said Google plans to release all the code needed for someone to join the exoplanet search, using a basic home computer and the publicly available Kepler data. No specialized hardware should be needed, he said.

Neither NASA nor Google expect to put astronomers out of business.

Shallue sees this as a tool to help astronomers have more impact and increase their productivity.

“It certainly will not replace them at all,” he assured reporters.