Both the U.S. and global economies are suffocating under the crushing weight of debt. The retarding effects of debt are further exacerbated by the growing regulatory burdens placed on businesses in the U.S. and Europe by voraciously expanding governments. Sluggish growth will continue until radical policy changes arrive or are forced on the system by another crisis (which hopefully won’t be squandered like the last one).

I remain deeply skeptical of the post-Brexit rally because it flies in the face of fundamentals. I still expect the S&P 500 to drop sharply by the end of the year and in 2017 and think it is dangerous to be heavily exposed to stocks in the current environment. Like much (but not all) of the market’s post-crisis rise, the current rally is fueled by blind faith in central bankers’ ability to prop up over-indebted and over-regulated economies around the world.

Market psychology was summed up very well by David Riley, head of credit at BlueBay Asset Management, who told The Wall Street Journal, “Fundamentally, the lesson to be drawn from this year is that when you’ve had shocks – whether it’s China or the oil price falls – you’ve got policy relief” from central banks.  I would respectfully suggest that this is the wrong lesson since central banks are making things worse, not better, and leading markets further out on limbs that are likely to snap off.

Back in May, an ordinary chemical engineer revealed a shocking discovery: a simple yet powerful market pattern that pinpointed 31 triple-digit windfalls averaging an astounding 130% gain EVERY two weeks. Now the same man who discovered this pattern has a big announcement to make. Go here to see his short message. It could forever change the way you look at investing and the markets.

Right now the S&P 500 is trading at all-time highs (I have to admit that I choke when I write that).

And – contrary to Wall Street’s endless cheery rhetoric – I would severely limit or hedge equity exposure right now, if I were you.

Here is a list of just some of the reasons I would limit or hedge equity exposure as the S&P 500 trades at all-time highs:

Furthermore, there is not a scintilla of evidence anywhere that political and business leaders or investors are concerned about America’s $19 trillion deficit and $60 trillion in unfunded future liabilities or the $600 trillion in global derivatives that everyone pretends don’t exist (and my response to that is Deutsche Bank). I didn’t hear a single word uttered about this issue at the Republican Convention or at the Democrats’ shindig in Philadelphia. If this is not gross political and moral malpractice on the part of our leaders, I don’t know what is. 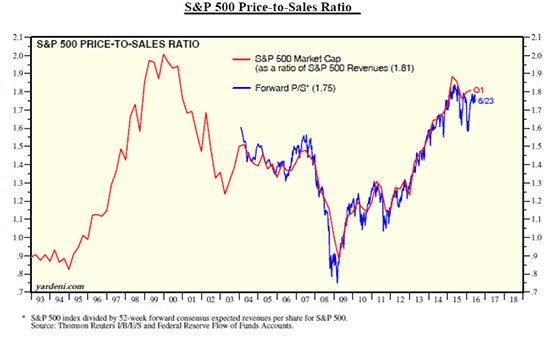 If you want to run out and chase stock prices at these levels, be my guest. My advice is to do the opposite and reduce or hedge your equity exposure. History and common sense strongly suggest that the current rally is unsustainable and stock prices are vulnerable to a serious reversal. Faith in central banks is not a strategy; it is a cult. Cults eat their own.

Edward Yardeni is one of Wall Street’s most respected economists. His recent work demonstrates that the stock market is trading at or near peak valuations. As Figure 3 above shows, the S&P 500 Price-to-Sales Ratio is now 1.81x, nearly as high as it was during the late 1990s when markets were dominated by irrational exuberance over the Internet Bubble. Price-to-Sales is a useful tool because it is harder for companies to fudge revenues than earnings (as we know all too well, it is child’s play to manipulate earnings with non-GAAP earnings adjustments). 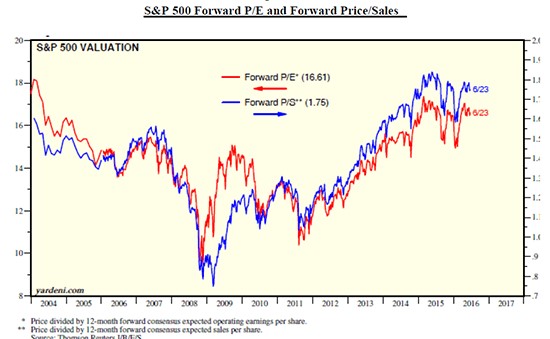 The destruction wrought by Ben Bernanke’s plan to push investors to take risk by destroying the returns on capital is becoming more obvious every day. Wilshire Associates reports that the long-term investment returns for public pension funds have dropped to their lowest recorded levels at 7.47%. That return would be respectable if it were risk-adjusted or sustainable, but it is neither and leaves these funds increasingly underfunded and on the road to insolvency. Hedge funds – including many run by well-known managers – are struggling to eke out a positive return for the third consecutive year while some are nursing double digit losses. Active managers are demonstrating with every passing day the lure of low fee index investing because they can’t figure out how to add value to investors’ portfolios in a world dominated by free money and market-dependent central banks.

When it pays to be stupid and passive rather than active and smart, something is seriously wrong. This is the result of a world run by people who have no clue what they are doing.

Disclaimer: © 2016 Money Morning and Money Map Press. All Rights Reserved. Protected by copyright of the United States and international treaties. Any reproduction, copying, or redistribution (electronic or otherwise, including the world wide web), of content from this webpage, in whole or in part, is strictly prohibited without the express written permission of Money Morning. 16 W. Madison St. Baltimore, MD, 21201.