Ego in chief! Obama honors HIMSELF with award - The Horn News 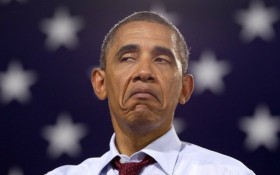 How big of a narcissist is President Barack Obama? Enough that his own White House administration has begun awarding himself medals – and holding small ceremonies to celebrate the honor.

Wednesday, Defense Secretary Ash Carter — an Obama appointee – held a congratulations ceremony where he presented the president with the Defense Department’s “Medal of Distinguished Public Service” as the administration’s token of appreciation… to itself.

How embarrassing can you get?

The self-awarded medal was pinned on Obama during a small ceremony at Joint Base Myer-Henderson Hall, a short drive from the White House, Wednesday.

Addressing the small crowd of men and women from the various military branches, Obama made sure to mention how great he was by telling them there is “no greater honor” than serving as commander in chief.

When social media users got wind of the self-congratulatory ceremony, they were ruthless —

@LSU_PI @markknoller Obama's narcissism is without equal.I'm surprised Obama didnt have himself awarded title of Caesar with a Laurel Wreath

@markknoller What does it remind me of when the government you purport to lead showers you with accolades? Hmmmm…https://t.co/fNmZOKQ3KP