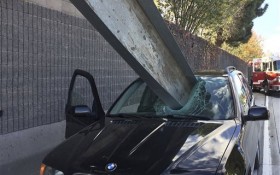 Northern California authorities say a driver is lucky to be alive after a large metal beam pierced the windshield of his SUV while on a San Jose freeway.

San Jose Fire Department Capt. Christopher Salcido says the beam fell off of a flatbed truck, crashing through the windshield and lodging itself into the driver’s seat of the BMW.

Both vehicles were traveling at 60 mph when the incident occurred around noon Friday on I-280.

Twenty-two-year-old Javier Zambrano of Los Banos was driving the Ford flatbed truck carrying the beam. California Highway Patrol spokesman Ross Lee says Zambrano will be cited for spilling a load once the investigation is complete.