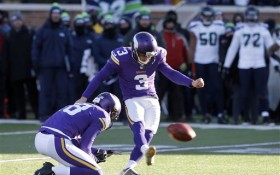 His team’s tough loss wasn’t the only headache this fan woke up to.

Police say a drunk Vikings fan who was tailgating at the Minnesota State Fairgrounds broke into a police substation after the team’s loss to Seattle, apparently thinking it was his own home.

State Fair police spokeswoman Brooke Blakey says the 30-year-old man appeared to be intoxicated when he entered the station Sunday. The station resembles a house.

Blakey says people use the fairgrounds to tailgate at Vikings games, which are played at nearby TCF Bank Stadium at the University of Minnesota.

Blakey says a patrol officer discovered the tailgater inside the substation around 4 p.m. The tailgater was arrested, booked into the Ramsey County jail and released. Trespassing charges are pending.