Drug accusations against NFL legend a hoax - The Horn News 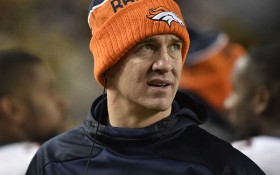 INDIANAPOLIS (AP) — The founder of an Indianapolis medical facility said Monday that a former unpaid student intern who claimed Denver Broncos quarterback Peyton Manning used a banned substance in 2011 didn’t even work at the clinic until two years later, long after the NFL star was undergoing treatment.

Dr. Dale Guyer, who started The Guyer Institute, said the allegations against the Denver Broncos quarterback are untrue.

Manning angrily denied using performance-enhancing substances shortly after the Al Jazeera report went public Saturday. It was based on secret recordings of Charles Sly, who named other high-profile athletes and suggested Manning obtained human growth hormone via mail addressed to his wife, Ashley.

Sly has since recanted the story and told Al Jazeera the statements attributed to him “are absolutely false and incorrect.” Guyer used similar language.

“I have no reason to believe these allegations are based in fact or have any truth. In fact, I can say with absolute certainty they are not,” Guyer said. “I would emphasize that Mr. Sly was never an employee of the Guyer Institute and his brief, three-month internship occurred in 2013 during which time Peyton was not even being treated or present in the office. I think it is obvious that Mr. Sly has fabricated this whole thing for reasons I cannot fathom.”

Guyer said Sly had no patient responsibilities and has had no affiliation with the clinic since his unpaid internship from February-May 2013. Manning was treated at the facility in 2011 following four neck surgeries.

Al Jazeera’s report claims Manning received HGH from the Indianapolis anti-aging clinic in 2011 while he was still with the Colts. It said the drug, which was later banned by the NFL in the 2011 collective bargaining agreement, was delivered to his wife so that the quarterback’s name was never attached to the shipments.

Manning said he sought holistic treatments such as hyperbaric oxygen and nutrient therapy at the Guyer Institute with the consent of the Colts training and medical staff. He called the report “complete trash, garbage” and other players identified in the report, including Clay Matthews and Julius Peppers of the Green Bay Packers, also denied any wrongdoing.

“Every medication I have is prescribed by our team physician,” Matthews said Sunday. “There’s no merit to anything he said, it’s almost laughable. Those allegations are not true.”

Another player named in the report, Pittsburgh Steelers linebacker James Harrison, said he has looked into legal action only to be told it wouldn’t be worth the cost. The 2008 NFL Defensive Player of the Year, who has five sacks this season, isn’t going to issue a denial like Manning.

“There’s no need to because I know what I’ve done,” Harrison said, later adding “it’s not even a conversation to me.”

Manning joined the Broncos in 2012 and had a record-setting run, going 47-15 until he tore the plantar fascia in his left foot on Nov. 15. That was the same day he broke Brett Favre’s NFL record for most career passing yards. The NFL’s only five-time MVP has been sidelined ever since.