Charges against Trump campaign manager to be dropped - The Horn News 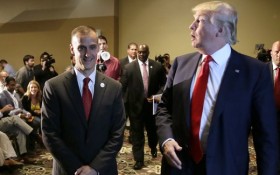 Opponents of Republican frontrunner Donald Trump went on the offensive when campaign manager Corey Lewandowski was charged for simple battery against reporter Michelle Fields, demanding Trump fire him immediately — and said that Trump’s refusal was an example of everything wrong with his presidential campaign. They said Trump was a poor leader. They said Lewandowski was a bully, Trump was sexist and the whole campaign was set to unravel.

It was as angry a lynch mob as the media could muster.

Will they apologize now that the Florida prosecutor’s office has announced plans to drop the case?

The initial charges led to a firestorm of criticism. Trump’s chief presidential rival, Texas Sen. Ted Cruz, said the charges against Lewandowski were proof on a “pattern of abusive behavior” by the Trump campaign. Ohio Gov. John Kasich said he would have immediately fired Lewandowski, and implied Trump should do the same.

The media joined in the outrage as well.

Slate said a presidential candidate who “possessed an iota of decency” would fire Lewandowski — and implied that Trump’s refusal to do so was shameful. Politico ran an article accusing Lewandowski of being “rough with reporters and sexually suggestive with female journalists” throughout his career.

The Daily Beast said not calling for Lewandowski’s head was “rolling over” to the Trump campaign.

Calm as ever, Trump replied to the criticism with a series of Tweets

Wow, Corey Lewandowski, my campaign manager and a very decent man, was just charged with assaulting a reporter. Look at tapes-nothing there!

Why aren't people looking at this reporters earliest statement as to what happened, that is before she found out the episode was on tape?

His opponents won’t say it — it would likely pain them it’s time to admit — but it looks like Trump was right. Again.

As his supporters say, “You can’t Stump the Trump.”

A Florida prosecutor’s office plans to hold a news conference amid reports that Lewandowski won’t be prosecuted over the videotaped altercation with a female reporter.

A spokesman for Palm Beach County state attorney Dave Aronberg told The New York Times there will be a news conference Thursday afternoon.

The charge came after a video showed Lewandowski grabbing Fields, who worked for Breitbart News at the time, as she tried to ask Trump a question after a March 8 appearance.

And the Trump campaign appears to have emerged from the media backlash stronger than ever.

Stephen Dietrich is the Managing Editor of The Horn News. The Associated Press contributed to this article.