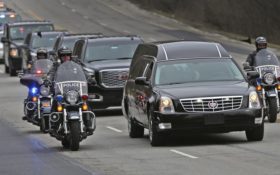 Several dozen police officers saluted the flag-draped body of a slain central Indiana sheriff’s deputy as it was taken from a hospital Monday three days after he was shot during a chase.

Scores of police vehicles and motorcycles escorted the hearse carrying Boone County Deputy Jacob Pickett’s body for several miles from St. Vincent Hospital on the north side of Indianapolis to the Marion County coroner’s office in the downtown area.

Boone County Sheriff Mike Nielsen announced early Monday that the 34-year-old married father of two young children had died. The K-9 officer was shot in the head Friday while chasing fleeing suspects in Lebanon, about 20 miles (32 kilometers) northwest of Indianapolis, and he was kept alive so his organs could be donated.

“He continues to give life even after death and that is so amazing to me,” Nielsen said. “That is another piece that will help us move forward in this tragic time.”

Pickett, a Boone County deputy for nearly three years, was head of the department’s canine team and his police dog named Brick was led by another officer during Monday’s ceremonies.

Officials were planning a Friday funeral for Pickett, with Nielsen saying Pickett’s family, friends and co-workers faced a “long, hard and tough week ahead of us.” Nielsen said Pickett always had the “fire in his eye” for being a police officer.

A 21-year-old Lebanon man, Anthony Baumgardt, was jailed Saturday on preliminary murder and other charges in Pickett’s death after he was released from a hospital where he was treated from being wounded when other officers returned fire, authorities said.

Officers ordered that man to stop, but he got into a car with his 55-year-old father and Baumgardt, and they fled the scene, Carter said.

Officers pursued that car through the streets of Lebanon, and Pickett and other officers joined the chase. The car stopped and the men ran away.

Authorities allege that Baumgardt shot Pickett as he rounded a corner with his police dog. All three suspects were eventually caught.