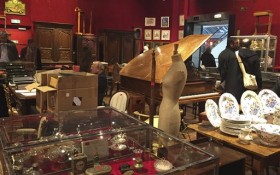 Four Paris auctioneers and dozens of auction workers have gone on trial accused of a vast scheme to steal thousands of pieces of artwork and other valuable items worth millions of euros over several years.

The works included a Courbet painting, Chagall and Matisse lithographs, and a 2.08-carat diamond. Workers tasked with transporting the objects allegedly stole them and then later sold some of them with the complicity of auctioneers.

Nearly all of the 50 defendants involved in the case at the Hotel Drouot, the biggest, oldest and most famous auction house in France, appeared in a Paris court Monday charged with gang-related theft, conspiracy to commit a crime or handling stolen goods.