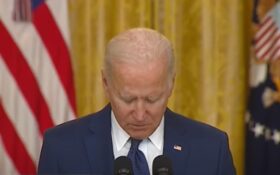 President Joe Biden and his Democratic allies in Congress are facing plunging approval ratings amid a disastrous Afghanistan withdrawal, out-of-control inflation, and new challenges related to the coronavirus.

And things won’t get any easier from here.

The Hill called the weeks ahead “a nightmare September” for Democrats that could make or break the left’s agenda.

With the way things are going now, the agenda is more likely to break.

When the Senate returns, they’ll have just days to tackle some of the most contentious issues that have divided their own conference, including the $3.5-trillion spending package that one key lawmaker has already said he can’t support.

Sen. Joe Manchin (D-W.Va.), one of the few remaining moderates in the Democratic conference, said he wants to “pause” the entire process.

“We have so much on our plate. We really have an awful lot. I think that would be the prudent, wise thing to do,” he told the West Virginia Chamber of Commerce this week.

Then, he almost seemed to taunt members of his own party – especially the ones who have been openly frustrated with Manchin’s reluctance to back a far-left agenda.

“I know they’re going to go nuts right now … because what I said is going to all my caucus in Washington,” he said, according to Politico. “But I’m thinking of it from the standpoint of where we are as a nation today.”

A pause is the one thing they can’t handle right now. The longer they wait, the less likely it is to pass – and far-left members of Congress are venting over it.

“No infrastructure bill without the $3.5 trillion reconciliation bill,” Sen. Bernie Sanders (I-Vt.) declared, threatening to spike the bipartisan deal to save the massive Democrat package.

Without Manchin’s support – and without the support of Sen. Kyrsten Sinema (D-Ariz.), who is also reluctant to back the $3.5 trillion bill – Sanders is unlikely to get what he wants.

If the Senate parliamentarian deems a bill to be sufficiently related to the budget, then the bill can pass with only 50 votes. So, spending and infrastructure are among the few areas where the Democrats can act without Republican support.

Other issues expected to come up this month, including voting rights and abortion, are unlikely to go anywhere given the 50-50 split in a Senate that requires 60 votes to stop a filibuster on most bills.

This Congressional logjam couldn’t come at a worse time for Democrats as Biden’s poll numbers are plummeting.

Now, the FiveThirtyEight average has him down in negative territory, with nearly 48 percent disapproving and just 45 percent approving.

In an NPR/PBS NewsHour/Marist poll last week, Biden’s overall approval rating was even lower at 43 percent – a six-point drop within a month – while the number who “strongly disapprove” skyrocketed to 41 percent.

The number who “strongly approve” now sits below 20 percent.

His numbers in specific districts are even more alarming: A poll of seven swing districts, all currently represented by Democratic lawmakers, finds he’s down by an average of 7 percentage points.

In MI-8, a key district that voted for former President Donald Trump by a fraction of a percent last year, Biden’s approval rating is 12 points lower than his disapproval rating.

That’s bad news for Rep. Elissa Slotkin (D) as she tries to defend the seat in 2022.

Elsewhere in the country, Democrats aren’t faring much better.

Unpopular Calif. Gov. Gavin Newsom is facing a recall election this week. Polls show he is likely to prevail, but they’re also much too close for comfort for the left, especially in a state that typically votes for Democrats by double-digit margins.

Experts warn it could be a harbinger of a shift to the right… just as the nation heads into next year’s contentious midterm elections, which will determine control over the House and Senate, and with it the fate of the Biden agenda.