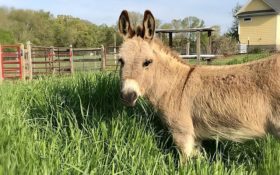 A donkey sculpture on a front lawn in a Maine town was set on fire in what one lawmaker called an act of “political terrorism.”

The sculpture was burned around 2 a.m. Saturday morning in Bowdoinham, on the property of former select board member Theresa Turgeon, who said she’s currently running for the town’s select board again.

“I don’t think it was personal to me. I can’t imagine that it’s personal to me,” she toldNewscentermaine.com. “I think it’s because there was a donkey and Democratic. I personally think that’s what it’s about.”

The large donkey sculpture was built by Doug Chess, a local artist and bus driver, as a symbol of the Democratic Party. It’s made out of wood, wire, cardboard, fiberglass and other materials. It had been circulating to different lawns around Bowdoinham and Richmond and had been at Turgeon’s since Friday.

The Sagadahoc County dispatch confirmed that a sheriff’s deputy was looking into the property damage.

Maine Rep. Seth Berry, D-Bowdoinham, called it “an act of arson and of political terrorism.”

“For 51 years, I have felt safe in Bowdoinham. It has always been a place where doors are unlocked, and acts of violence only happen in the news. But not anymore,” Berry wrote.