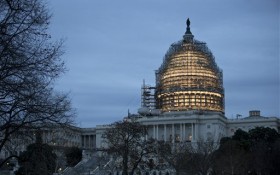 Despite protests from conservatives on the right, Congress on Friday easily gathered the votes and officially sent President Barack Obama a huge, deficit draining year-end budget package that bloats federal agency spending and awards tax cuts to a sweeping array of business interests.

A 65-33 Senate vote on the measure was the last act that shipped the measure, combining $1.14 trillion in new spending in 2016 and $680 billion in tax cuts over the coming decade, to Obama. It had earlier swept through the House on a pair of decisive votes on Thursday and Friday, marking a peaceful end to a yearlong struggle over the budget, taxes, and Republican efforts to derail his regulatory agenda.

Obama will sign the measure, which includes many of the spending increases he fought for all year and is largely cleansed of GOP attempts to block his moves on the environment, financial regulation, and consumer protection.

Republicans were evenly split with 27 of them voting in favor and 26 against the bill. Presidential contender Marco Rubio was absent.

The measure received big bipartisan majorities in both House and Senate. It capped an impressive first few weeks for new Speaker Paul Ryan, R-Wis., who got the benefit of the doubt from most Republicans, who by a wide margin opposed earlier legislation that established the framework for the budget package.

Some Tea Party lawmakers were dismayed by the burst of spending and a lack of wins for conservatives.

“There are so many things in this bill that will be surprising and shocking to the American people,” said Rep. Walter Jones, R-N.C. “Maybe there is a Santa Claus. At least in the House.”

The House voted on the spending portion of the measure on Friday, when it won support from House Republicans by a 150-95 margin. Democrats followed Pelosi’s lead and backed the bill by a 166-18 margin.

The spending measure would fund the operations of every Cabinet agency. It awards increases of about 6 percent, on average, above tight spending caps that were a relic of a 2011 budget and debt deal — and were opposed by both GOP defense hawks and Democrats seeking boosts in domestic spending.

The House vote bundled with the spending measure a tax bill that passed on Thursday.

The need for Obama’s approval helped rid the measure of most of the controversial GOP provisions: killing federal money for Planned Parenthood, limiting the flow of Syrian refugees and undoing dozens of Obama actions on the environment, labor, financial regulation and relations with Cuba.