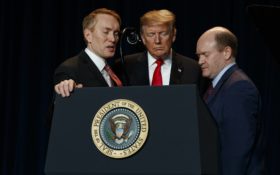 President Donald Trump stunned conservative voters across the country and vowed to use his presidency in 2020 to better protect prayer in schools.

Trump said he will use executive power to empower Christian students, as well as those of other faiths, who pray openly in their schools. Trump also reminded public schools that they could lose federal funding if they violate a student’s right to pray.

The Trump White House announced the new move in a press briefing Thursday that began with a simple message: “Happy Religious Freedom Day.”

The White House announced the new guidance on the right to prayer in public elementary, middle, and high schools by inviting students from Christian, Jewish and Muslim faiths that have been discriminated against for an Oval Office celebration.

Additionally, the Department of Education has been ordered to send a letter from Trump to authorities in all 50 states that will remind them that students can’t be discriminated against for praying in school.

“It will empower students and others to know and exercise their rights,” Trump’s Director of the Domestic Policy Council Joe Grogan told NPR.

And the Office of Management and Budget will tell states that federal grants “must also be dispersed to religious organizations, including churches and public schools, in addition to secular groups,” Buzzfeed News reported.

“Specifically, the administration will tell federal grantees that they cannot condition sub-awards in a way that disadvantages applicants based on their religious character.”

The White House cites a recent conservative court victory, Trinity Lutheran Church of Columbia v. Comer, as motivation. In the case, a Christian church in Missouri won a government grant to refurbish its playground, which was defended by the Supreme Court.

Grogan said this new rule would undo the damage from laws that try to prevent tax money from being used by religious schools and organizations.

“We’re trying across the board to invite religious institutions and people of faith back into the public square and say, ‘Look, your views are just as valid as anybody else’s,'” Grogan told NPR. “‘And, by the way, they’re protected by the First Amendment to the Constitution.'”

Grogan says the move is critical for protecting religious freedoms and Christianity in the United States.

“Whenever the president of the United States draws his megaphone upon a subject, people will pay attention,” Grogan said. “It’s important for all Americans, parents, teachers, administrators, and citizens to understand that the First Amendment protects religious beliefs and protects people in expressing their spiritual life in the public square.”

FLASHBACK: Chelsea Clinton SPITS IN THE FACE of Christians (she’s lost it!)