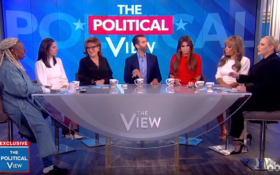 Donald Trump Jr. stepped into the lion’s den on Thursday when he joined “The View,” the famously liberal show where even the “conservatives” on the panel are often vehemently opposed to President Donald Trump.

Naturally, they wasted no time attacking him and his father.

But he came prepared with a few reminders of their own ugly past, and just three words left the panel stunned.

Joy Behar kicked things off by reminding Trump Jr. of some of the more explosive things his father has said.

Behar called those examples of a president who’s “lowering the discourse to his level, which is horrible for the country.”

The president’s son wouldn’t stand for it.

He pointed out that everyone’s said and done some bad things… even certain daytime TV hosts.

“We’ve all done things that we regret,” Trump Jr. said.

But it wasn’t long before the truth came out.

A 2016 clip began circulating on social media in which Behar not only bragged about dressing up as a “beautiful African woman” for a Halloween party at the age of 29, but even shared an image of the moment:

“You ain’t black,” she said. “Did you have tanning lotion on, Joy?”

“I had makeup that was a little bit darker than my skin,” Behar replied.

The show even ran an image of the old photo pic.twitter.com/qKQqzDPxyn

The president’s son wasn’t done calling out hypocrisies by the hosts. He reminded Goldberg of a controversial moment of her own.

“Whoopi, you said that Roman Polanski, it wasn’t ‘rape-rape,’ when he raped a child,” he said.

Rather than admit it was a dumb thing to say, she fired back: “Are you questioning my character?”

Trump Jr. said he was just making the point that everyone’s had an off moment or two (or more).

“I’m not questioning your character,” he said. “I’m talking about, you’re questioning my father’s character, and I say we all have done and said things.”

That’s not the only wild moment from the rare visit to “The View” by a member of the Trump family.

The audience was so raucous – booing and cheering loudly throughout the segment – that Goldberg reportedly scolded them in a profane lecture during one of the commercial breaks.

“The booing is f—ing us up,” she said, according to The Hollywood Reporter. “It’s messing with everyone’s mic. You can grimace and all that. All we hear is booing.”

But it kept happening, so the show’s warmup comedian came out to appeal for calm during another commercial break.

At another point, Behar flipped out on the audience for cheering the president’s son.

“Listen, this is not a MAGA rally, OK,” she berated the audience, according to Fox News.

And during yet another break, Goldberg got into it with an audience member who also challenged her over her Polanski comments, eventually retorting: “Be quiet and listen to me.”

If that’s not enough fireworks for one show, Trump’s girlfriend – former Fox News host Kimberly Guilfoyle – put the show’s hosts on the spot for wanting to impeach the president before he even took office.

But once again… whoops… online observers were quick to find a clip of Goldberg using the “i” word right after the 2016 election:

"The View" got busted in another lie after Whoopi argued with @kimguilfoyle that they weren't calling for Trump's impeachment on the first day after the election.

"There is such a thing called impeachment."pic.twitter.com/PWhf3si3ZB

Who says daytime TV is boring?