Investigators closing in on James Comey - The Horn News 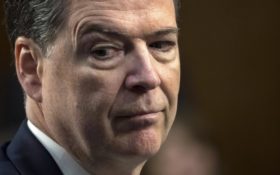 Former FBI Director James Comey once stood near the top of the world of law enforcement.

Today, he’s reportedly in the exact opposite position. He could be suspect, as a series of new reports reveals that U.S. Attorney John Durham’s growing investigation is zeroing in on Comey.

Durham is examining the origins of the Russia probe that attempted to frame President Donald Trump with now-disproven allegations of collusion.

But he’s also looking beyond that. The New York Times says Durham is investigating whether or not Comey illegally leaked confidential information to reporters after President Donald Trump took office in 2017.

The Times warns that the Justice Department could be looking to “make an example” of Comey.

Herridge said Durham was focusing on leaks that took place from January-May 2017 – the period after Trump took office — both while Comey was still FBI director and in the weeks that followed his May 9 firing by the president.

Red State notes that Comey was apparently working behind the scenes to build an obstruction case during that same period – even as he worked to serve in the Trump administration as FBI director.

“After each meeting or phone call Comey had with the President, he wrote a memo to himself about everything they had discussed,” the website noted.

After he was fired, he leaked several of his memos to a friend, who then passed them to The Times, according to what has been revealed so far. Investigators later determined those memos contained classified information, but Comey was not charged with a crime.

It’s not clear if those specific memos are the source of the current probe, or if Durham is looking at other possible leaks.

Herridge said that Durham was focused on that time frame “because the paper trail is so strong.”

The CBS report was backed by investigative journalist Sara Carter, who said Durham was focused on a “slew of government documents” from that same time period.

She called the documents “significant” and said they “will expose the intent of those involved in the malfeasance at the FBI and the continued operation to spy on Carter Page, a short term Trump campaign volunteer.”

She added that the probe is honing in on “senior” Obama officials who targeted Trump, including Comey, former CIA Director John Brennan and former FBI Deputy Director Andrew McCabe.

Durham has already telegraphed that he’s onto something.

Last month, Justice Department Inspector General Michael E. Horowitz released a report criticizing the FBI, but concluded there was no basis for Trump’s repeated allegations that the agency conspired against him and spied on his campaign.

Durham could have remained silent and accepted those results.

Instead, he made it very clear that he’s reaching a very different conclusion.

“Based on the evidence collected to date, and while our investigation is ongoing, last month we advised the inspector general that we do not agree with some of the report’s conclusions as to predication and how the F.B.I. case was opened,” he said in a statement.

Durham will be hard for progressives to discredit given his impeccable credentials. He’s investigated allegations of misconduct at both the FBI and CIA for Democratic and Republican administrations alike: Clinton, Bush, Obama and Trump.

And having served in the Justice Department since 1982, he knows his way around the bureaucracy.

That, no doubt, has Comey – and anyone who may have conspired with him – very nervous.

Durham’s report could arrive as early as spring.