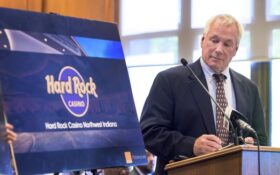 Democrat or Republican, the Department of Justice doesn’t mind.

Attorney General Bill Barr is cracking down on corruption on both sides of the aisle.

A federal indictment was announced Tuesday that charges former state Republican Sen. Brent Waltz of Greenwood and local Indiana casino boss John Keeler with taking part in a scheme to direct more than $25,000 in illegal corporate contributions through straw donors to Waltz’s 2016 campaign.

According to IndyStar, the pair have been charged for illegally funneling more than $40,000 from straw donors.

Reports of the indictments come after an FBI raid of the former state senator’s home. According to the charges, Waltz and Keeler hid the operation by paying an outside consultant who then reimbursed straw donors — or, persons who use another person’s name to make a political contribution.

The federal investigation involving Keeler became public in January after a political consultant pleaded guilty in Virginia to arranging for several people to write campaign checks for Waltz with casino company money that originated through a fake contract with for political work.

Indiana casino officials this spring forced Keeler and fellow Spectacle executive Rod Ratcliff to give up their ownership stake in a planned new $125 million Terre Haute casino because of the investigation, but allowed a business partner to go ahead with the project.

The Indiana Gaming Commission said it suspended Keeler’s casino license on Tuesday and was investigating the actions of Spectacle and others involved.

“This matter is extremely serious,” commission executive director Sara Gonso Tait said. “The ability for this company to continue to hold an Indiana gaming license is in question.”

Messages seeking comment were left for Keeler and at a phone number previously listed for Waltz, who was a state lawmaker for 12 years before giving up his seat for the congressional run.

Indianapolis-based Spectacle said in a statement that Keeler has taken administrative leave.

“It is important to remember that Mr. Keeler is presumed innocent of all charges,” the statement said. “Spectacle Entertainment will have no further comment at this time.”

Ratcliff and Keeler, a lawyer who was a Republican legislator for 16 years in the 1980s and 90s, have been active lobbyists in the Indiana Legislature for many years on casino matters. They pushed lawmakers last year to allow the Gary casino’s move from along Lake Michigan to a more lucrative location along Interstate 80/94 in Gary. Republican Gov. Eric Holcomb faced a state ethics review last year of his dealings with Ratcliff.

Ratcliff, who is not named in the indictment and does not face any criminal charges, resigned in June as Spectacle’s chairman and CEO, in a move apparently not publicly announced by the company.

Ratcliff is no longer allowed “to exert any control or management” over the new Gary casino but remains a substantial owner of Spectacle, according to the Gaming Commission.

Spectacle’s announcement last week of the promotion of executive vice president Jahnae Erpenbach as chairwoman and CEO included no mention of Ratcliff. A company spokeswoman didn’t immediately reply to a request for an explanation of his departure.

Ratcliff and Keeler were leaders of Centaur Gaming, which sold Indiana’s two horse track casinos in Anderson and Shelbyville to Las Vegas-based Caesars Entertainment Corp. in 2018 for $1.7 billion. They led a group that then formed Spectacle to buy the Gary casino operation.

According to the federal indictment, 15 people were recruited in the scheme to make maximum contributions of $2,700 to the Waltz campaign while they were illegally repaid from nearly $80,000 that originated from the casino company to the Virginia-based political firm Strategic Campaign Group.

The indictment also charges Waltz with lying to FBI agents by telling them that $12,000 he received from Rogers was a retainer for Waltz to provide investment banking services. Waltz is also charged with falsely telling investigators he sold artwork and other items for more than $100,000 that he loaned his campaign, while two people not named in the indictment illegally gave him that money.

Waltz finished fourth in a five-candidate field in the 2016 Republican primary for the 9th Congressional District that stretches from the southern Indianapolis suburbs to Ohio River communities just north of Louisville, Kentucky.

The Indianapolis Star reported last year that Ratcliff treated Holcomb to private jet flights in 2018 as they traveled together for meetings hosted by the Republican Governors Association in Colorado and Arizona. But the state’s inspector general concluded the governor committed no wrongdoing as it determined the flights were provided to the governor’s group rather than Holcomb’s office.

The flights were among $500,000 Ratcliff and his companies contributed in 2018 to the Republican Governors Association, which gave Holcomb $7.6 million of the $14.5 million he spent on his 2016 election campaign.