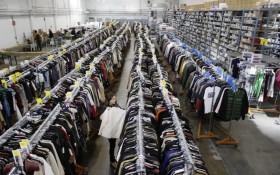 Our hat goes off to these two good Samaritans for their help in returning a senior’s missing property. Two employees at Truth or Consequences thrift-store in New Mexico found more than clothes and knickknacks in the donation box, instead finding an envelope stuffed with $290,000 in U.S. savings bonds.

The Albuquerque Journal reports that an employee of the Community Health Foundation Thrift store found the envelope while sifting through donated items, and they notified their manager. The manager called the police and immediately turned the bonds over to an officer, who happened to know the man in whose name the bonds were subscribed.

Police say they contacted the man, who recalled the exact amount of the bonds and said he was unaware his personal property had been donated. He had recently been moved into an assisted living center and an advocacy group acting as his guardian had cleaned out his apartment.