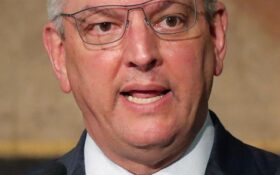 A dog will do the honors at the “ribbon cutting” for the Louisiana State University School of Veterinary Medicine’s new pet clinic.

A toy will be attached to a ribbon held by VIPs at the Stephenson Pet Clinic on Monday afternoon, and a Belgian Malinois named Mac will pull it away from them, veterinary school spokeswoman Ginger Guttner said.

Stephenson and his late wife, Toni Stephenson, were the biggest donors among 300 who gave $5 million to help pay for the 40,000-square-foot building, Guttner said.

The new building houses many of the school’s clinical services, including primary care, dermatology, integrative medicine, and ophthalmology.

The number of people, labs, and services has greatly increased since the Veterinary Medicine Building was completed in 1978, the news release said.

The LSU School of Veterinary Medicine is among 33 U.S. veterinary schools and is the only one in Louisiana.