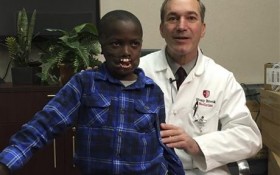 Heroic New York doctors are giving a young boy a new face — and a new lease on life.

Dunia Sibomana was considered the lucky one two years ago when a group of chimpanzees jumped from the trees and attacked him and two other boys as they played near a preserve in their native Democratic Republic of the Congo. 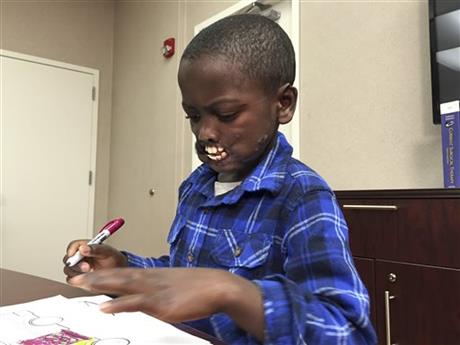 Dunia, unlike the others, survived. But he was severely disfigured: His lips ripped off and one cheek torn
apart, leaving him with muscle damage that make it hard for him to eat, swallow and communicate.

Now, 8-year-old Dunia is undergoing a rare and complicated set of surgeries at a Long Island hospital that will use tissue and muscle from his forearm to help restore his face and recreate both lips. The hope is that he will once again be able to open and close his mouth, and eat and talk normally.

“As you can imagine, not having any lips, the food can just come right out,” said Dr. Leon Klempner, an associate professor of dentistry at Stony Brook Children’s Hospital. “He drools all the time and can’t pronounce different words.”

The first surgery Monday was one of three major operations for Dunia, who was brought from the Congo in November with the help of the nonprofit foundation Smile Rescue for Kids.

Dr. Alexander Dagum, the hospital’s chief of plastic and reconstructive surgery, said he believes there are only three other documented cases where the same surgery has been performed. The hospital is covering the cost of the surgery and the doctors have all donated their time.

Since the attack, which killed Dunia’s 4-year-old brother and a young cousin, Dunia has been the target of bullies and become shy and withdrawn. In his short time in the United States, he has been living with a host family on Long Island, attending elementary school and learning English in addition to his native Swahili.