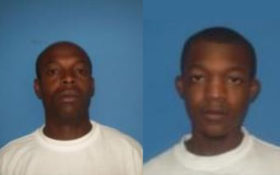 Police are seeking two men who they say burned a cat by pouring hot liquid on the animal while in a cage.

Karmen Coleman, 23, removed the video after learning she faced charges of rendering criminal assistance. She turned herself in Friday.