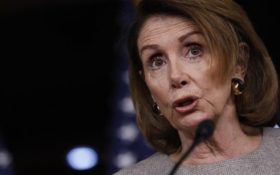 And it’s exactly what Trump was hoping for.

“Our democracy is what is at stake,” Pelosi said. “The president leaves us no choice but to act.”

Pelosi delivered the historic announcement as Democrats push toward a vote, possibly by Christmas.

“The president’s actions have seriously violated the Constitution,” Pelosi said.

Voters disagree. Poll after poll shows that the majority of Americans were unmoved by the Democrat-led impeachment inquiry.

At the heart of the Democrat-led impeachment is a July call with the president of Ukraine, in which Trump asked the leader about an investigation into Joe Biden’s son and his reputation for shady deals.

During the impeachment announcement, Pelosi invoked the debunked conspiracy theory that the president coordinated with Russia to win the 2016 election.

“Our democracy is what is at stake,” Pelosi said in her announcement. “The president leaves us no choice but to act because he is trying to corrupt, once again, the election for his own benefit. The president has engaged in abuse of power, undermining our national security and jeopardizing the integrity of our elections.”

Trump tweeted that if “Do Nothing Democrats” are going to impeach, “do it now, fast.” He said he wants to get on to a “fair trial” in the Senate so “our Country can get back to business.”

The president also said that Democrats have “gone crazy.”

…..trial in the Senate, and so that our Country can get back to business. We will have Schiff, the Bidens, Pelosi and many more testify, and will reveal, for the first time, how corrupt our system really is. I was elected to “Clean the Swamp,” and that’s what I am doing!

One of the four legal scholars testified Wednesday to the House Judiciary Committee that Democrats were rushing the impeachment process. He argued this would be the shortest of impeachment proceedings, with the “thinnest” record of evidence in modern times, setting a worrisome standard.

Across the Capitol, the polarizing political divide over impeachment, only the fourth such inquiry in the nation’s history, was on display.

Democrats in the House say the inquiry is a duty. Republican representatives say it’s a sham. And quietly senators of both parties conferred on Wednesday, preparing for an eventual Trump trial.

Trump, attending a NATO meeting in London, called the hearing a “joke” and doubted many people would watch because it’s “boring.”

Once an outsider to the GOP, Trump now has Republicans’ unwavering support. They joined in his name-calling the Judiciary proceedings a “disgrace” and unfair, and said it was part of an effort to undo the 2016 election and remove Trump from office.

“You just don’t like the guy,” said Rep. Doug Collins of Georgia, the top Republican on the panel. Trump rewarded some of his allies with politically valuable presidential tweets as the daylong hearing dragged into the evening.

Meanwhile, Trump’s team fanned out across the Capitol with Vice President Mike Pence meeting with House Republicans and White House officials conferring with Senate Republicans to prepare for what could be the first presidential impeachment trial in a generation.

White House Counsel Pat Cipollone, who has declined for now to participate in the House proceedings, relayed Trump’s hope that the impeachment effort can be stopped in the Democrat-controlled House and there will be no need for a Senate trial, which seems unlikely.

White House officials and others said Trump is eager to have his say. Sen. Roy Blunt, R-Mo., said, “He feels like he has had no opportunity to tell his side of the story.”

Trump lambastes the impeachment probe daily and proclaims his innocence of any wrongdoing at length.

Democrats have officially begun drafting articles of impeachment, and a Judiciary Committee vote will be held next week. The full House could vote by Christmas. Then the matter would move to the Senate for a trial in 2020.