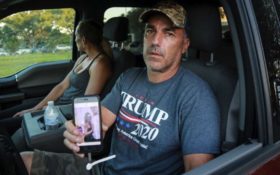 One day after 17 people were murdered in a Florida high school shooting, ruthless liberals attacked a man who’s daughter was just killed.

A photo posted to Twitter of Andrew Pollack showed the gentleman wearing a t-shirt that read “Trump 2020” — and hateful leftists took this as an opportunity to attack the grieving man.

The attack occurred on Twitter after journalist Alexandra Seltzer shared the photo of Pollack wearing the so-called disturbing shirt.

At the time the photo was taken, Pollack was holding up a photo of his daughter in hopes that by sharing her picture she could be found.

Little did he know at the time, his sweet angel had been murdered by the ruthless killer —

Here is Andrew Pollack yesterday showing a photo of his daughter Meadow. At that time he was searching for her. Today he said “she’s gone.” #stonemanshooting pic.twitter.com/MJcuCNttt8

In a matter of minutes, snowflakes pounced on the man because of his political views — despite the heartbreaking reality that his daughter had just died.

Last year trump signed a bill that made it easier for people with mental illness to get them. He can most certainly be held responsible.

For decades the gop has been bought by the gun lobby,
the issue has been used by them as a wedge to divide,by spreading hate&fear,to gain power,and money.Every gop vote prevents the solutions,common sense gun control and regulatio.The #trumputin cyber attack fans these extremist.

Sorry for his loss! He voted for a man who had no gun control plans. Trump even reversed the one Obama had in place. Funny how life works, you don’t think that something bad will ever happen to you unti it does.

His T-Shirt Speaks Volumes!! My Prayers go out to his Daughter “Meadow”. I’m DISGUSTED with his t-shirt. He can blame himself FOREVER for trump doing NOTHING. How SAD ????

I'm unforgiveable, but it's a little hard to feel sorry who supported this administration and its racist and its NRA supporting policies. I feel sorry for daughter,but not for him. He probably doesn't make the connection behind his Party's policies and what happened to his child

The t-shirt that man was wearing does not change the reality of the situation — this grieving man just lost his little girl, and he will never get to see her again.

It does not matter who Pollack voted for, in a time like this, Americans should join together to support those who are suffering… not continue to tear them down.

In situations like these, Americans should be thankful to a liberal is not running the country… we would all be doomed.