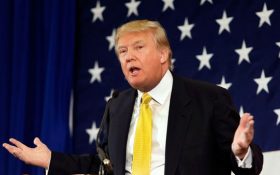 Republican presidential candidate Donald Trump has made a fortune in savvy business deals, television shows and book deals over his decades as a New York businessman.

For over twenty years, he’s given some of his vast fortune back. Trump has spent millions on a charitable foundation that’s helped donate to help childhood cancer research, African-American schools, veterans groups, and environmental and conservative causes in the United States according to Newsday.

New York Attorney General Eric Schneiderman is looking to end all that over a paperwork technicality. Schneirderman would rather score cheap political points for his political ally, Democratic presidential candidate Hillary Clinton, than let charitable causes operate, his critics claim.

According to a spokesman of Schneiderman, the Trump Foundation didn’t obtain the right registration in New York that’s needed to ask for donations over $25,000, The Washington Post reported Thursday. As a result, Schneirderman is threatening to shut the charity down.

The Horn News reported in April that Schneiderman, a Democrat and outspoken Clinton supporter, has aggressively pursued the case against Trump University as an apparent political favor to the Democratic candidate. Schneirderman is a member of Clinton’s New York leadership team, and has publicly endorsed Clinton’s presidential run.

Trump spokesman Jason Miller called Schneiderman “a partisan hack who has turned a blind eye to the Clinton foundation for years and has endorsed Hillary Clinton.”

The fact that a major Clinton supporter is using a position of power to make frequent public accusation against her political opponents does raise serious questions about whether the New York attorney general’s office is more about politics than about the law.

It’s even more stunning when one considers that Clinton has been under four federal investigations and her New York-based Clinton Foundation has been accused of frequent wrongdoings — including not properly paying their taxes — and yet has completely escaped Schneirderman’s attention.

But to longtime Clinton opponents, it’s far from surprising.

This is politics as normal for the Clinton family — power must be obtained, even at the cost of charity giving.