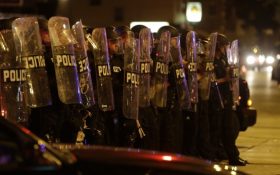 While crazed rioters in Milwaukee were burning businesses and destroying police vehicles, Democratic presidential candidate Hillary Clinton took an alarming stance on the issue of race relations – she blamed the police for the violence for not having enough “respect” for criminals and thugs!

“We’ve got urgent work to do to rebuild trust between police and communities, and get back to the fundamental principle: Everyone should have respect for the law and be respected by the law,” Clinton said.

In other words, cops need to start giving criminals the respect they deserve.

Coming from her, such a statement would be funny if it weren’t so sad.

Here’s the facts — Clinton’s remarks will not help calm the matter. According to critics, she actually could be escalating the situation.

“The people who live in the neighborhood want police – they want the police in Milwaukee and the sheriff’s department to step up and protect them. They didn’t want the criminals who were doing those actions against those businesses to do that. And I think statements like that and the lack of leadership we have had from the president on this issue only inflame the situation,” Wisconsin Gov. Scott Walker told “Fox and Friends” on Tuesday.

Republican presidential nominee Donald Trump weighed in on his opponent at a rally Tuesday, claiming that she is one of the enemies “peddling the narrative of cops as a racist force in our society.”

Trump was in Milwaukee to meet with law enforcement officers and hold multiple campaign events across Wisconsin.

According to reports of events since Clinton’s speech, hatred in Milwaukee continues to grow — even as the mainstream media tries to cover it up.

In a televised segment on CNN Monday, Correspondent Ana Cabrera reported Sherelle Smith, the sister of a man who was killed by a Milwaukee police Saturday, was “calling for peace.”

In an Op-Ed for The Hill, Milwaukee Sheriff David Clarke recognized this “Black Lives Matter-enabling media” as one of the issues leading to the civil unrest. He blames the liberal left for “expanding the welfare state” and not doing enough to improve “inescapable poverty.”

Clarke called for Americans to face the facts he has witnessed in his career, and comes to the conclusion that the violence in Milwaukee “had little to do with police use of force – it was a collapse of the social order.”

Previously, Clarke had called Clinton a “straight up cop-hater.”

By brushing off the extreme division in America as a problem with the respect cops show criminals, Clinton is proving him right..