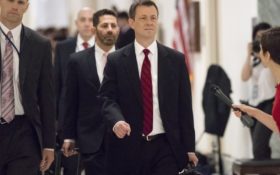 An FBI agent removed from special counsel Robert Mueller’s team because of derogatory text messages about President Donald Trump is expected to speak publicly to members of Congress next week.

Strzok was interviewed by lawmakers behind closed doors for hours last week. The judiciary panel subpoenaed him to appear publicly to answer questions. He was initially supposed to testify this coming Tuesday.

Strzok is a veteran agent who helped lead the FBI’s investigations into Hillary Clinton’s email use and into potential coordination between Russia and the Trump campaign.

He briefly worked for Mueller’s team but was reassigned last summer following the discovery of anti-Trump text messages he had exchanged with an FBI lawyer.