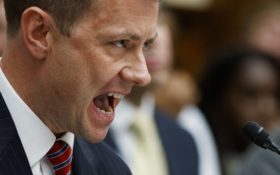 An outspoken anti-Trump FBI agent whose text messages fueled suspicions of partisan bias shouted during a hearing in Congress on Thursday that his work has never been tainted by politics, angrily rejecting Republican allegations that he set out to stop Donald Trump from becoming president.

Peter Strzok testified publicly for the first time since being removed from special counsel Robert Mueller’s team, telling lawmakers that texts he traded with an FBI lawyer in the run-up to the 2016 presidential election reflected personal views that he never once acted on.

Even though he promised that “we’ll stop” Trump, Strzok angrily claimed he wasn’t biased.

He said it was his personal view, written late at night and off-the-cuff, of “horrible, disgusting behavior” by the Republican presidential candidate.

But, he added in a raised voice and emphatic tone, “It was in no way — unequivocally — any suggestion that me, the FBI, would take any action whatsoever to improperly impact the electoral process for any candidate.”

Just after noon, Peter Strzok actually denied that his text messages expressing disdain for Trump were “indicative of bias.” He actually said that.

Republican members of the House judiciary and oversight committees grilled Strzok as they argued that the text messages exchanged with FBI lawyer Lisa Page color the outcome of the Hillary Clinton email investigation and undercut the ongoing investigation into Russian election interference. Strzok, a seasoned counterintelligence agent, helped lead both investigations but has since been removed after the text messages were uncovered.

“Agent Strzok had Hillary Clinton winning the White House before he finished investigating her,” said Rep. Trey Gowdy, Republican chairman of the House Oversight and Government Reform Committee. “Agent Strzok had Donald Trump impeached before he even started investigating him. That is bias. Agent Strzok may not see it but the rest of the country does, and it is not what we want, expect or deserve from any law enforcement officer much less the FBI.”

The hearing briefly devolved into chaos and open yelling as Judiciary Committee Chairman Robert Goodlatte said Strzok needed to answer Republicans’ questions and suggested they might recess the hearing and hold him in contempt. Democrats shouted down Goodlatte’s repeated attempts to get Strzok to answer. Goodlatte eventually let the hearing proceed without calling the panel into recess.

“Let me be clear, unequivocally and under oath: Not once in my 26 years of defending my nation did my personal opinions impact any official action I took,” he said.

Although Strzok has said through his lawyer that he was eager to tell his side of the story, he said being questioned was successfully “sowing discord in our nation and shaking faith in our institutions.”

“I have the utmost respect for Congress’s oversight role, but I truly believe that today’s hearing is just another victory notch in Putin’s belt and another milestone in our enemies’ campaign to tear America apart,” Strzok said. “As someone who loves this country and cherishes its ideals, it is profoundly painful to watch and even worse to play a part in.”

Republicans eager for ways to discredit Mueller’s investigation have for months held up the texts from Strzok and Page to support allegations of anti-Trump bias within federal law enforcement.

The Justice Department’s inspector general has criticized Strzok and Page for creating the appearance of impropriety through the texts. But the report said it found no evidence of political bias in the FBI’s decision not to pursue criminal charges against Clinton.

FBI Director Chris Wray says employees who were singled out for criticism in the inspector general’s report have been referred to internal disciplinary officials. Strzok’s lawyer has said he was escorted from the FBI building last month as the disciplinary process winds its way through the system.

Page, who has also been subpoenaed, is expected to speak to lawmakers at a private meeting on Friday.