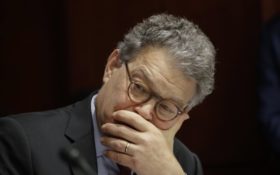 Former Senator Al Franken just made a shocking announcement during an interview with CBS Minnesota.

Last year, the disgraced former senator resigned from his position after several women came forward with allegations of sexual misconduct against him.

After a humiliating resignation last year, this man still believes he has another chance of winning.

When he was asked about a potential return to the political realm, Franken was attending a dedication of Bug-O-Nay-Ge-Shig High School on the Leech Lake Reservation.

According to Fox News, the former senator, “managed to secure $12 million funding for a new facility there during his time in the U.S. Senate.”

Last December, Franken resignation following several woman accusing him of groping and trying to kiss them.

“Enough is enough,” said New York Sen. Kirsten Gillibrand after the sexual misconduct allegations emerged. At least 36 members from the Democratic party called on him to resign last December.

Following his resignation, Franken’s wife spoke out and said, “It has been a challenge, but we do get to spend more time together, and I think there are times that both us would like to spend less time together.”

I think many Americans would agree that they would rather Franken stay home with his wife, than run for public office again.