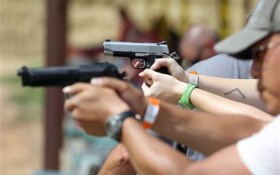 An Indianapolis restaurant owner is offering a 25 percent discount to concealed-carry permit holders after his business was robbed.

Restaurateur Art Bouvier announced the discount Saturday night on Facebook shortly after the robbery at his Cajun restaurant Papa Roux. It’s unclear how much money was taken, but no one was injured.

Bouvier tells The Indianapolis Star (http://indy.st/1WdgIvg ) that his employees handled the situation like pros and none of his customers knew the restaurant was being robbed until the thief left.

Bouvier says he doesn’t want his restaurant to “turn into the O.K. Corral,” but he also doesn’t want it to “be an easy target.”

He says legal gun owners with concealed carry permits will be offered the discount until further notice.