Disagreement over chili leads to stabbing - The Horn News 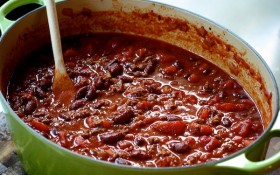 Police say a dispute over stirring a pot of chili led to an attack that injured two people at a Detroit home.

Officer Jennifer Moreno says a 26-year-old is accused of attacking his 35-year-old wife and a 30-year-old man who is a family acquaintance around 5:10 a.m. Friday on the city’s west side.

Moreno tells the Detroit News the acquaintance stirred the pot, which was on the stove, and the man apparently didn’t like that. Moreno says the acquaintance told police the man bit and stabbed him because he “was unhappy about him stirring the chili.”

Police say the acquaintance had bite and stab wounds to his thigh that were non-life-threatening. The woman wasn’t taken to the hospital.