Did Trump just wink at leaving the GOP?! - The Horn News 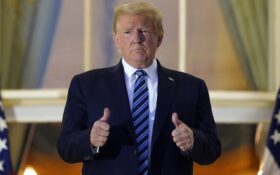 Former President Donald Trump had become surprisingly inactive since announcing his re-election campaign more than two months ago, until he made a bold move earlier this month.

In early January, Trump went on Truth Social to share a column speculating about a third-party candidacy.

Some commentators took Trump’s actions as a hint. “WHOA: Donald Trump Threatens To Leave GOP To Run As Independent If He Loses In 2024 Primary,” one person tweeted Saturday, referring to the column.

The columnist compared the 2024 election to the 1912 election. Back then, former Republican President Theodore Roosevelt formed a third party to run against fellow Republican William Howard Taft, the incumbent president. Roosevelt earned more votes than Taft, but they both ran behind Democrat Woodrow Wilson.

“We’re heading for a 1912-repeat, in which the Republican Party ignores its own voters,” the columnist said. “Now, if the Republican Party thinks it’s not big enough for Trump, it’s not going to be big enough for me either. Do I think Trump can win as a third-party candidate? No. Would I vote for him as a third-party candidate? Yes.”

By sharing the column, Trump stirred speculation about running as an independent or on a third party.

“This is a credible threat,” a liberal pundit at Bloomberg tweeted on Monday. “Trump has no reason *not* to run 3rd party, since he doesn’t care about the GOP at all. And even getting 10% of the vote would be enough to sink DeSantis, and it would let Trump have the limelight for a bit longer.”

Other observers remain skeptical. One law professor pointed out that Trump risks missing the deadline to de-register with the GOP.

Members of both parties agreed that a third-party candidacy would likely spoil the election for the Republican nominee.