Did Trump have a bad Thursday in court? It's complicated... - The Horn News 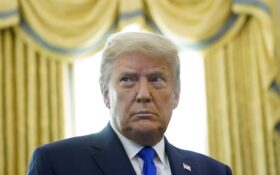 President Joe Biden’s Justice Department scored a win in one of its investigations against former President Donald Trump on Thurday, when a unanimous federal appeals court on Thursday ended an independent review of documents seized from Mar-a-Lago, Trump’s Florida estate.

The appeals court’s decision took up an inordinate amount of space in the headlines. The New York Times, The Washington Post and the Wall Street Journal all sent notifications to their digital subscribers.

However, Trump gained ground this week in a different case, one in New York City.

All in all, the former president is faring better than the headlines may have you believe.

In addition to the Justice Department’s case regarding classified records, Trump is also implicated in a criminal case in New York City. Specifically, Allen Weisselberg — the Trump Organization CFO — has pleaded guilty to tax fraud in Manhattan.

In fact, the prosecutors are apparently blaming Trump himself for Weisselberg’s alleged crimes.

“Donald Trump knew exactly what was going on with his top executives,” prosecutor Joshua Steinglass said in his closing arguments Thursday afternoon.

The prosecutor went on to blame the Trump Organization for pushing “a culture of fraud and deception” that encouraged Weisselberg to commit crimes.

The defense has argued that Weisselberg acted for his own benefit, not for the benefit of Trump or the Trump Organization.

“Does the evidence prove beyond a reasonable doubt that when Allen Weisselberg cheated on his personal tax returns [that Weisselberg] had some intent to benefit the Trump Corporation?… You are going to see there was no such intent.”

Another defense attorney, Susan Necheles, told the jury that Weisselberg “knew he was doing something wrong and was ashamed of it and kept it secret [from Trump].”

The prosecution has presented a transparently flimsy case against the Trump Organization, and so the jury may decide not to hold the company liable for Weisselberg’s alleged crimes.

The jury could decide the case as soon as Monday, the judge reportedly said.

In any case, Trump has remained unscathed from New York City’s protracted investigation.

On the other hand, the Mar-a-Lago decision represents a significant win for the Biden’s Justice Department, and it clears the way for the Justice Department to use as part of their investigation the entire tranche of documents seized during an Aug. 8 FBI search of Mar-a-Lago. It also amounts to a sharp repudiation of arguments by Trump’s lawyers, who for months had said that the former president was entitled to have a so-called “special master” conduct a neutral review of the thousands of documents taken from the property.

The decision about Mar-a-Lago was made by a three-judge panel on the Atlanta-based U.S. Court of Appeals for the 11th Circuit. The ruling had been expected given the skeptical questions the judges directed at a Trump lawyer during arguments last week, and because two of the three judges on the panel had already ruled in favor of the Justice Department in an earlier dispute over the special master.

The decision was a unanimous opinion from the panel of Republican appointees, including two who were selected by Trump. In it, the court rejected each argument by Trump and his attorneys for why a special master was necessary, including his claims that various seized records were protected by attorney-client privilege or executive privilege.

The conflict over the special master began just weeks after the FBI’s search, when Trump sued in federal court in Florida seeking the appointment of an independent arbiter to review the roughly 13,000 documents the Justice Department says were taken from the home.

A federal judge, Aileen Cannon, granted the Trump team’s request, naming veteran Brooklyn judge Raymond Dearie to serve as special master and tasking him with reviewing the seized records and filtering out from the criminal investigation any documents that might be covered by claims of executive privilege or attorney-client privilege.

Thursday’s decision by the appeals court chips away at Cannon’s ruling.

“It is indeed extraordinary for a warrant to be executed at the home of a former president — but not in a way that affects our legal analysis or otherwise gives the judiciary license to interfere in an ongoing investigation,” the judges wrote.

A Trump spokesperson said Thursday’s decision was “purely procedural” and did not address the “impropriety” of the raid, and promised that the ex-president would “continue to fight.” The Justice Department has accused Trump of trying to delay the investigation, but Trump hasn’t yet indicated whether he intends to appeal.