Did the Navy kill these dolphins? - The Horn News 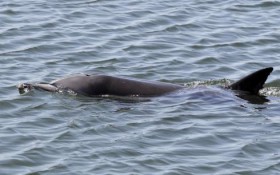 The National Marine Fisheries Service on Wednesday said it was investigating the death of two dolphins found washed ashore in California shortly after Navy ships were using sonar in nearby waters.

Necropsies have been conducted, and the animals are being analyzed to try to determine what caused them to get stranded, agency spokesman Jim Milbury said.

Two Navy ships were using mid-frequency active sonar 80 nautical miles away from where the dolphins were found, Holland said. They used the sonar for slightly more than an hour over two days from Oct. 19.

Other ships were conducting an amphibious exercise in the area at about the same time, but these ships don’t have sonar capabilities, Holland said. Explosives weren’t used in this exercise either, she said.

Navy ships use sonar to search for submarines in the water. The ships pump sound through the water and listen for objects from which the sound bounces off. Sonar can disrupt marine mammal feeding and communication from a great distance. It can cause deafness or death in marine mammals when used closer.

The fisheries service notified David Henkin, an Earthjustice attorney representing environmental groups, of the deaths as part of a settlement reached over a lawsuit challenging sonar use. It also posted a notice on its website.

Under the terms of the settlement, the fisheries service has six months to decide whether the incident requires it to modify the circumstances in which the Navy may use sonar.

Henkin said he appreciates that the agency is notifying the public and is investigating.

He said he didn’t want to prejudge the outcome of the investigation, but the news “reinforces the concern about these types of activities in marine mammal habitat.”

There are just 323 common bottlenose dolphins in the California coastal population of the species, Henkin said. The California, Oregon and Washington offshore population numbers 1,006.

The loss of two dolphins from either population would be “a lot,” he said.