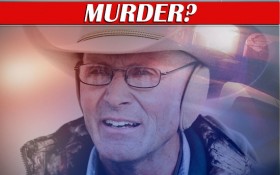 It was long feared that the standoff at Oregon’s Malheur National Wildlife Refuge between law enforcement and armed protesters would end in bloodshed.

One man is dead and seven were arrested after the FBI and Oregon State Police performed a traffic stop involving a group of protesters along a remote Oregon highway.

Now, those who remain of the group that has occupied the refuge for three weeks are claiming the death was cold-blooded murder by the police.

They’re alleging that the victim, identified as 55-year-old Robert “LaVoy” Finicum, had his hands raised and was unarmed before state police officers started firing. Finicum was a frequent and public presence at the Oregon reserve, often speaking for the group at news conferences.

“LaVoy Finicum was shot and murdered in cold blood today… by the FBI and State Law enforcement,” according to a statement on the Bundy Ranch Facebook page, which has been disseminating communications from the protesters. “He had his hands up and was shot three times.”

Law enforcement officials, however, are painting a very different picture. Witnesses have claimed that the men were armed and resisted arrest, and there are conflicting reports about whether Finicum may have charged the officers.

Adding to the mystery, Finicum had previously vowed to not be taken alive.

Militant leader Ammon Bundy and his followers were reportedly heading to a community meeting at the senior center in John Day, a Grant County town about 70 miles north of Burns, to address local residents to discuss their views on federal management of public lands.

The confrontation came amid increasing calls for law enforcement to take action against Bundy for the illegal occupation of the wildlife refuge.

Oregon State Police confirmed that its troopers were involved in the traffic-stop shooting. They would not release further information about the death pending identification by the medical examiner.

Each will face a federal felony charge of conspiracy to impede officers of the United States from discharging their official duties through the use of force, intimidation or threats, authorities said. Authorities released few other details.

The militants, calling themselves Citizens for Constitutional Freedom, came to the frozen high desert of eastern Oregon to decry what they call onerous federal land restrictions and to object to the prison sentences of two local ranchers convicted of setting fires.

Specifically, the group wanted federal lands turned over to local authorities. The U.S. government controls about half of all land in the West.