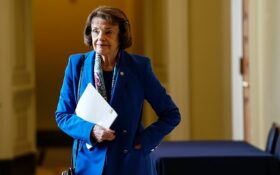 Sen. Dianne Feinstein, D-Calif., turned 89 in June. She’s set to become the oldest member of the next Congress, and her advanced age has invited questions about her mental fitness.

On Tuesday, she had an embarrassing “senior moment” that quickly went viral — and critics called it “alarming.” An Insider reporter witnessed a total lapse in Feinstein’s memory, and she needed a Senate aide to come to her rescue.

Last month, Feinstein declined the opportunity to serve as Senate president pro tempore, a position normally reserved for the most senior senator of the majority party. She said in a statement to The Washington Post, “I’ve never thought about being the president pro tempore and I have no interest in it at this time.”

By Tuesday, the Senate had convened again, and Feinstein was once again fielding questions about becoming president pro tem.

She appeared to forget her previous commitment to avoid taking the role.

Feinstein told the reporter, “Well, I haven’t thought about it, but I’ll let you know when I do… I just got back, I’ve had a lot of issues.”

Then, a Senate aide interjected. The aide told Insider that Feinstein “told a few reporters in the past that she’s not thought about it, and has no intention of seeking the position.” The aide then told reportedly Feinstein, “That’s what you told reporters.”

“I don’t know what you’re saying,” she told the aide, according to Insider.

The aide clarified, “This is about the Senate pro tem position.”

Feinstein maintained, “Well, I haven’t said anything about it, that I know of.”

The aide finally said, “You were asked about it over the break, and you put out a statement saying that you had no intention of running for it.”

“Okay,” Feinstein concluded. “Well then, I guess it’s out.”

It’s the latest in a string of what opponents and allies both call an alarming trend.

The Horn News reported last year on Feinstein’s potential to become Senate’s president pro tem. Since then, the Democrats have won control of the Senate for another two years.

The Senate president pro tem can oversee the Senate in the event of the vice president’s absence.

The Senate president pro tem sits third in the line of succession for the presidency — behind the vice president and the House speaker but ahead of the secretary of state.

Leahy is retiring in January, and he’s leaving the position open.

Feinstein first joined the Senate in 1992. In the next Congress, she’s set to become the Senate’s most senior Democrat.

Sen. Patty Murray, D-Wash., ranks as the second-most senior Democrat in the chamber. Murray is set to become president pro tem instead of Feinstein, Murray’s office said in a statement.