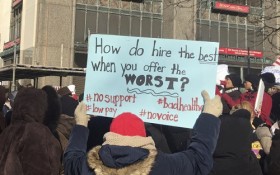 It’s one of the poorest and worst-performing school districts in the country — and today it was shut down by its own teachers.

Nearly all of Detroit’s public schools were closed today after the teachers union urged members to call out sick following a weekend announcement that the district is nearly bankrupt, and wouldn’t be able to pay its teachers for their summer break.

Instead of trying to resolve the issue, the teachers simply walked off the job and left thousands of students and parents holding the bag.

District spokeswoman Michelle Zdrodowski said in an email Monday morning that 94 of the district’s 97 schools would be closed for the day. About 46,000 students are enrolled in the district’s schools.

“This is despite the fact that in the 2011-2012 school year—the latest for which the Department of Education has reported the financial data—the Detroit public schools had ‘total expenditures’ of $18,361 per student and ‘current expenditures’ of $13,330 per student,” according to CNS News.

Meanwhile, Detroit teachers can make up to $78,000 a year. Now, facing cutbacks on pay during summer vacation, they’ve shut down just about all the schools in response — effectively holding these students hostage.

The move by the Detroit Federation of Teachers was announced Sunday, a day after Detroit Public Schools’ transition manager said the district would have no money to continue paying teachers this summer without further funding from the state.

In March, Gov. Rick Snyder signed into law emergency funding that is keeping the district operating through the end of the school year as the state Legislature considers a $720 million restructuring plan that would pay off the district’s enormous debt.

Former bankruptcy Judge Steven Rhodes, who was appointed this year to oversee the district, also said Saturday that DPS would be unable to fund summer school or special education programs after June 30.

On Sunday night, he said in a statement that the union’s “choice for a drastic call to action was not necessary” and said that a sickout is “counterproductive and detrimental” to the efforts of those trying to help the school district.

“I understand the frustration and anger that our teachers feel,” Rhodes said. “I am, however, confident that the Legislature will support the request that will guarantee that teachers will receive the pay that is owed to them.”

Teacher strikes are illegal under Michigan law. Sick-outs earlier this year caused tens of thousands of students to miss class.