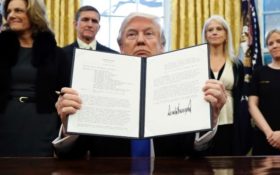 The travel ban, put in place by President Donald Trump’s executive order last week (a move widely popular among the American people), was been temporarily suspended by a controversial judge in Washington over the weekend.

The next opportunity for Trump’s team to argue in favor of the ban will come in the form of a response to these filings. The 9th Circuit ordered the Justice Department to file its briefs by 6 p.m. EST Monday. It had already turned down a Justice request to set aside immediately a Seattle judge’s ruling that put a temporary hold on the ban nationwide.

The judge opens up our country to potential terrorists and others that do not have our best interests at heart. Bad people are very happy!

I have instructed Homeland Security to check people coming into our country VERY CAREFULLY. The courts are making the job very difficult!

Congress “vests complete discretion” in the president to impose conditions on entry of foreigners to the United States, and that power is “largely immune from judicial control,” according to the Justice Department’s court filing.

Sen. Dianne Feinstein, the top Democrat on the Judiciary Committee, predicted the appeals court would not have the last word.

“I have no doubt that it will go to the Supreme Court, and probably some judgments will be made whether this president has exceed his authority or not,” she said.

Trump’s order applied to Iraq, Syria, Iran, Sudan, Libya, Somalia and Yemen — Muslim-majority countries that the administration said raise terrorism concerns. The State Department said last week that as many as 60,000 foreigners from those seven countries had had their visas canceled.