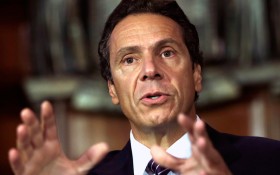 Whispers from the left-wing are swirling that former Vice President Joe Biden should be dumped at the Democratic National Convention in June — and New York Gov. Andrew Cuomo should take his place as the Democratic presidnetial nominee.

Cuomo – for better or worse – has been idolized by the mainstream media as a Democratic hero for his COVID-19 outbreak response. He is regularly featured on cable news channels — including Fox News, CNN, and MSNBC — as the global pandemic has transpired from his home state in New York.

As the dismaying and bleak numbers out of New York grow, the “Draft Cuomo” rally cry has circulated around social media.

“Times have changed & we need Gov. Cuomo to be the nominee,” says a Draft Cuomo Twitter account that recently popped up. “Our next POTUS must be one w/an ability to lead through his crisis.”

The country depends on it.

According to experts, Democrats could make the swap should the media continue to praise Cuomo — and Biden’s mental miscues slow his campaign.

Boston Globe, while skeptical that Democrats would ever allow a last-minute replacement, wrote that Cuomo represents everything Biden is not.

” … a strong orator who oozes leadership and decisiveness. He’s macho without being threatening or creepy.”

As America’s war with the Wuhan virus wages on, critics say that Biden has become an afterthought. Uncertainty surrounds the next Democratic debate, and Biden’s virtual campaign has been seemingly drowned out by the noise.

Pundits such as National Review panned his most recent The View appearance as a bumbling performance.

Does this make any sense to you? pic.twitter.com/Z4kcDpokUQ

Many news headlines amid the virus outbreak seem to indicate that it’s Cuomo, not Biden, actually running against President Donald Trump.

The media has set up a prizefight between the two, comparing and contrasting which politician is effectively leading the fight against COVID-19,

If one thing is for certain: Cuomo’s profile has not only skyrocketed due to the media coverage of the crisis, but also simply because his name has come out of Trump’s mouth.

Trump has given many of his rival politicians a press boost, and Cuomo is no different.