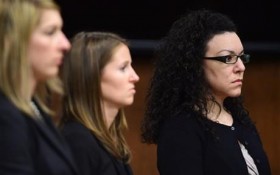 A Colorado woman brutally killed an unborn baby when she sliced it out of a pregnant mother’s womb while the mother was still alive.

Now, thanks in part to the actions of Colorado state Democrats, Dynel Lane could not be convicted of murder for the child’s death, and could face as few as 16 years for the heinous crime.

Prosecutors said Lane was obsessed with having a baby and concocted elaborate lies to convince those close to her that she was pregnant. She was convicted Tuesday of cutting a nearly 8-month-old fetus from a stranger’s womb.

The case against Lane, 36, who lured Michelle Wilkins to her home with a Craigslist ad for maternity clothes, attracted international attention and reignited a national debate over the legal rights of fetuses.

Jurors convicted Lane of attempted first-degree murder, assault and unlawful termination of a pregnancy in the March 2015 attack on Michelle Wilkins. District Attorney Stan Garnett said he was not able to charge Lane with murder in the death of the unborn girl under Colorado law.

Colorado Republicans had introduced legislation that would have allowed him to do so. But Democrats rejected the measure.

It was the third time such a proposal failed in Colorado, setting it apart from 38 states that have made the killing of a fetus a homicide over the objection of many pro-abortion-supporters.

Now, for the other charges she was convicted of, Lane faces between 16 and 120 years in prison.

Wilkins, 27, said she thought of the child she had planned to name Aurora as she sat in the courtroom, clasping the hand of her father, Mark Wilkins.

“I do not hate Dynel,” Wilkins said. “But I am angry for all the pain she has caused, the deceit and for her selfishness.”

Lane sat straight and quiet next to her public defenders as the judge read the verdict from the jury of seven women and five men who deliberated for about seven hours over two days. Judge Maria Berkenkotter ordered her held until sentencing, set for April 29.

Lane’s attorneys left court without commenting. During the trial, they did not dispute that she attacked Wilkins but argued there was no evidence it was a calculated murder attempt. They said the assault was haphazard and impulsive and urged jurors to convict Lane of the lesser charge of attempted manslaughter.

Lane had posted online photos of herself with a distended belly and sent the man she said was the father of her child ultrasound images downloaded from the Internet. David Ridley, who lived with Lane and her two daughters, testified at trial that Lane claimed for more than a year that she was expecting a boy, whom they planned to name James. Friends even threw a baby shower.

Ridley had grown suspicious by the time Lane lured Wilkins to her Longmont home. Wilkins testified that they chatted for about an hour before Lane hit, pushed and tried to choke her, then used two kitchen knives to cut the baby from her womb.

When Ridley came home early from work that day to meet Lane for a doctor’s appointment, he said he found the fetus in a bathtub and drove the child and Lane to a hospital, where she begged staff to save her baby.

Lane said nothing to Ridley about Wilkins, who was unconscious at her home. Wilkins regained consciousness and called police.

In 2002, Lane’s 19-month-old son drowned in what investigators ruled was an accident.